'I Found My Tribe’ is a book by Ruth Fitzmaurice. It explores the writer’s life with her filmmaker husband Simon Fitzmaurice, who has motor neuron disease and their family. Video: Nick Bradshaw/Roisin Ingle 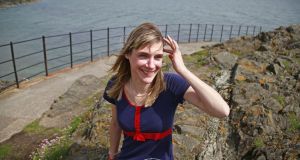 Book Title:
I Found My Tribe

‘The right man in your bed is a glorious thing,” Ruth Fitzmaurice writes. She’d spent her life living in her head, until up sauntered Simon, “all blue eyes and dancing hands”, and broke into the solitariness of her daydreams. They fell gloriously in love, travelled, ate plenty – “when you’re in love and gripped by good sex, food is never more wonderful” – and made plans for their glittering future: he’d direct movies and she’d write books.

He proposed (an appropriately glamorous gesture on the Empire State Building), they got married, had one baby, then another. Ruth got pregnant for the third time, then Simon’s right foot stopped working. Ruth blamed the stiff clutch on the funky black convertible that Simon drove (“too fast”). But it wasn’t the car’s fault. Simon, a young man, only 34, had motor neuron disease, and the prognosis was three to four years.

Sometimes I was breathless from stabs of pain, but this book reads almost like poetry

Within weeks he was walking with a stick, then crutches; then he moved to a wheelchair; and eventually every single one of his muscles stopped working, until Ruth spent three days pressing on his chest to keep his lungs breathing. Now Simon survives thanks to a ventilator (for a lot longer than the original prognosis). His eyes are the only muscles he can use, so he communicates through a computer. Their house is always full of strangers: nurses and carers who cause queues for the bathroom and strew coffee cups everywhere, so the place looks like a student gaff.

You’d think this would be a harrowing account. How could a story so tragic be anything else? But I Found My Tribe is written with such lightness of touch that it’s life-affirming, powerfully so. Yes, sometimes I was breathless from stabs of pain, but this book reads almost like poetry. In beguiling, luminous words Ruth tells her story in a seemingly scattergun way, the timeline jumping from the present to the past to the middle, as the overall picture builds up like a mosaic made from shiny beautiful things.

A lot of the time she’s very funny, and her interactions with healthcare professionals trigger observations like, “I never knew that hippies were such control freaks. Beware of nurses brandishing big jewellery and natural remedies. Theirs is a will that is not to be battled with.”

Ruth coped by cooking, painting and having more babies: she had twins in 2012, bringing her tally of children to five. Then, in 2014, she started swimming in the cold Irish sea. She lived in Greystones, right by the water, although she’d barely noticed it until another tragedy happened.

In a coincidence of horrible cruelty, Simon’s friend Galen was knocked off his bike and paralysed from the waist down. Galen and his wife, Michelle, had been daily swimmers, but in the wake of the accident Michelle stopped. To help her friend save herself, Ruth decided to swim with her, so she put on her flowery togs and dived into the perishing water.

Initially the coldness hit like a headslam, but after 10 seconds the cold stopped, and after another 10 seconds what she felt was pure freedom. She loved it – and, honestly, even though I can’t think of anything more awful, her exhilaration was attractive, persuasive even.

Ruth and Michelle christened their swimming group the Tragic Wives Club. (They allowed their friend Aifric to join; even though her husband was healthy he was bald, so at least he was in some way afflicted, they reasoned.)

Reading this book, I kept thinking, human beings can survive anything: the most brutal of losses, the bitterest of sorrows

And now swimming has become Ruth’s salvation. It shocks her body back to life, calms her anxiety and gives her a handy spot to cry unobserved. This all happens on our rainy little rock of a country, in our cold seas, on our stony beaches and under our overcast skies.

As a nation we seem to spend our time bemoaning the fact that we’re not Italy. But Ruth demonstrates that it’s all in our attitude. Even in the bleakest of circumstances, redemption is possible. The profound comfort she finds in the banal reminds me of Patrick Kavanagh’s late-in-life poems set at the Grand Canal.

Reading this book, I kept thinking, human beings can survive anything: the most brutal of losses, the bitterest of sorrows.

There’s a lie we tell ourselves about people who’ve been hit with tragedy: that they’ll be given the strength to live with it. Maybe it’s the only way to make it less frightening for ourselves. So that even if, God forbid, something similar ever happened to us, the catastrophe would come gift-wrapped with superhuman powers of acceptance and endurance.

But Ruth doesn’t always want to endure the crippling grief over the lost life she and Simon and their children were meant to have. There are times she considers walking into the sea in her coat.

She’s matter-of-fact about this. There’s no self-pity, but there’s understandable rage. Like the time she got abused for driving too slowly by a driver with a sense of entitlement. Stopped at traffic lights, she got out of her car, leaving her five children and paralysed husband behind, and berated your man, eventually kicking his car until the lights changed and he screeched away.

One of the bonus gifts that comes with great pain is wisdom, and Ruth certainly has this in bucketloads. “A single moment won’t save you,” she writes. “We all need saving again and again and again.” She understands that most profound truth: that life is about getting through the day, the next hour, the next five minutes.

I Found My Tribe is inspiring, humbling and a picture of what love really looks like

It’s hard to know what kind of person she’d have been if something so horribly out of the ordinary hadn’t been waiting for her. But, in I Found My Tribe, she comes across as so loving and essentially blithe that it feels like we’re getting the person she always was.

Marian Keyes’s next novel, The Break, is due to be published in September

Ruth Fitzmaurice will be at West Cork Literary Festival on Tuesday, July 18th, at 10am in Bantry House tea room; westcorkliteraryfestival.ie