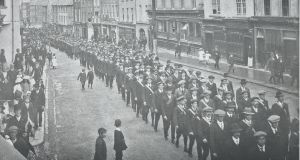 Following the split in the Irish Volunteers in September 1914, over 95 per cent of the members switched allegiance to the National Volunteers. Members of the Kilkenny National Volunteers parade down High Street in October 1914 on the occasion of John Redmond’s inauguration as Freeman of the City. Ccourtesy of James Stephens Barracks Museum

Ireland is just a few short months away from marking 100 years since the beginning of the Irish War of Independence – usually commemorated on January 21st, 1919 – the day the first Dáil was established and when a group of IRA volunteers attacked an RIC convoy in Co Tipperary. This will be quickly followed by the centenaries of the signing of the Anglo-Irish Treaty and the subsequent Civil War. Much apprehension exists as to how these dates will be remembered, particularly in regards to the civil conflict.

In this writer’s opinion, one of the best ways of approaching these impending commemorations is by focusing on the individual stories and personalities involved, in as open, clear and objective a manner as humanly possible. In other words, by relating the events and experiences of those that took part in this tumultuous era of Irish history, no matter which “side” they were on, we can allow for a more comprehensive understanding of the complexities and differing viewpoints involved. Furthermore, the local aspect of the “revolutionary decade” – with its parochial dimensions, politics, and rivalries – has yet to be fully explored and understood. Consequently, my new publication, Kilkenny, In Times of Revolution, 1900-1923, aims to rectify this, specifically in regards to Co Kilkenny.

War of Independence
Usually the only mention of Kilkenny in the history books concerned with this era refers to the infamous capture of Ernie O’Malley, an IRA HQ officer, by crown forces in Inistioge in December 1920 during the War of Independence. This led to the subsequent arrest of many local Kilkenny IRA volunteers as O’Malley’s notebook contained their names and addresses. However, this does not come close to understanding the widespread impact of the War of Independence in Kilkenny. For instance, in March 1920, the first successful capture of a Royal Irish Constabulary barracks in Leinster occurred in the south of the county with the seizing of Hugginstown RIC Barracks by the Kilkenny IRA Brigade. By 1921, there were two flying columns operating in the county, with each initiating numerous ambushes and barrack attacks against British forces. By the end of the War of Independence in Kilkenny, seven IRA men were dead, seven members of the crown forces had been killed (including three who were Irish born), along with eight civilians fatalities (including those executed as informers); bringing to 22 the total number of fatalities.

Civil War could have commenced in Kilkenny
Co Kilkenny saw even more conflict during the Civil War. Indeed, Kilkenny City narrowly avoided being recorded by historians as the place where the Irish Civil War commenced. In early May 1922, nearly two months prior to the official beginning of the Civil War, Kilkenny anti-Treaty IRA units took over 15 buildings in Kilkenny City, most notably St Canice’s Cathedral and Kilkenny Castle. There followed a two-day gun battle between those barricaded in the buildings and the Free State/National Army who attempted to dislodge them. Eventually, all anti-Treaty positions were captured by the pro-Treaty forces. More than 100 anti-treaty men and Cumann na mBan women were arrested in the aftermath of the fighting. Most likely because there were no fatalities – although more than 20 people were seriously injured – a peace agreement was reached in Dublin between representatives of the opposing sides, hence the avoidance of civil war; for the time being. It also allowed Kilkenny to escape an infamous place in the history books as the birthplace of the Irish Civil War.

Civil War comes to Kilkenny
Co Kilkenny was at the forefront of the Civil War as the Free State Army headquarters for the Southeast Division was based there; thus the county became the front line between the Free State stronghold of Leinster and the anti-Treaty “Munster Republic”. The attack on Waterford City in July 1922 by Free State forces – led by Colonel-Commandant John Thomas Prout – and the subsequent assault on Carrick-on-Suir in Co Tipperary were initiated from Kilkenny.

There then followed a period of widespread guerrilla fighting throughout the county – eerily similar to the type of combat targeting the crown forces just a year previously. Perhaps the most vivid memory of the Civil War era for the typical Kilkenny person was the destruction of the rail network by the anti-Treaty forces, with at least one such attack a week, with the overall aim of impeding the Free State Army and of also gaining provisions. A bleak day in the history of the county occurred on December 29th, 1922 with the execution of two Kilkenny natives – John Murphy (aged 22, from Bennettsbridge) and John Phelan (aged 32, from Thomastown) – by the Free State authorities in Kilkenny Military Barracks. They were the first such Free State executions to take place outside of Dublin or The Curragh.

Utilising all available evidence, it is estimated that 26 people were killed in Co Kilkenny during the Civil War. This included 13 anti-Treaty combatants, nine Free State soldiers and four civilians. At least another 15 Kilkenny natives were killed outside the county, mostly fighting for the Free State Army in other areas of the Southeast Division, emphasising the wider geographical spread of the Civil War when compared to the previous conflict.

Life of the “ordinary” citizens
Not to be forgotten, the lives of the ordinary Kilkenny inhabitants are important to examine. In many respects, for many, normal life continued relatively unabated throughout the conflicts of 1919-1923, although there was much upheaval. The Catholic Bishop of Ossory admonished his flock from the pulpit after he witnessed Kilkenny women bathing with soldiers in the River Nore; “mixed bathing” being a big no no in his book! In addition, hurling matches had to be cancelled due to the unrest, while one man wrote to the board of the Kilkenny workhouse asking could he “pick” one of the female “inmates” to be his wife!

One women, 36-year-old Margaret Ryan, was fatally wounded having been shot by an Auxiliary during a funeral procession in Callan. She died on Christmas Eve 1920 and tragically was pregnant with her first child at the time of her death. In an incident unrelated to the conflict, Bridget Foley and her seven-year-old daughter, Bridie, died in Kilkenny City in March 1921 when an object in their coal exploded, killing them nearly instantly from flying debris.

As can be discerned with this synopsis of Co Kilkenny, a more thorough and deep-rooted examination is needed before we can understand the complexities and intricacies of this period in Irish history. It is possible we may have been just scratching the surface all along.
Kilkenny, In Times of Revolution, 1900-1923, by Eoin Swithin Walsh is published by Merrion Press and is available in bookshops nationwide, at €19.99