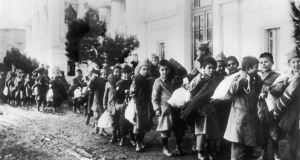 Greek and Armenian war orphans in 1922: after their parents were killed during the 1919-1922 conflict between Greece and Turkey, they were sent to Greek orphanages. Photograph: Keystone-France/Gamma-Keystone via Getty Images 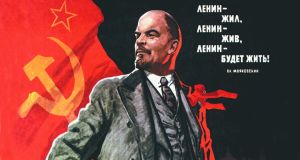 The proposition that the two world wars were mere phases in a decades-long European civil war continues to fascinate historians. Robert Gerwarth’s version of this hypothesis focuses on the prolonged, chaotic peace of civil war, ethnic strife and political violence that followed the end of the first World War. Although Winston Churchill contemptuously dismissed these postwar conflicts as “wars of the pygmies”, four million people died in them – more than the wartime casualties of Britain, France and the United States combined.

By the mid-1920s Europe had stabilised somewhat but large-scale violence resumed in the 1930s and 1940s. The culminating horror of this European civil war was the murder of millions of Jews by the Nazis during the second World War. However, the template for such ethnic cleansing was prefigured in pogroms against Jewish communities during and after the first World War.

Brutalised and disillusioned war veterans had a prominent role in the violent postwar upheavals that engulfed the vanquished states of the first World War. But more important was the way the war had ended. Although by summer 1918 the military outcome of the conflict was apparent, it was domestic revolts in Germany, Austria-Hungary and Turkey that actually ended the war. As Gerwarth points out, the transition to new democratic regimes in these countries was initially relatively peaceful. The violence and chaos that followed was provoked by the punitive peace terms imposed on the defeated by the victor states.

While the harsh conditions enacted on Germany by the Treaty of Versailles – territorial losses, financial sanctions, military restrictions – are well-known, more important was the allied decision to break up the Hapsburg Empire and replace it with a number of smaller, multinational states that were supposedly based on national self-determination, a principle that was applied unevenly and did not apply at all to Germans and Hungarians, or to the Turks.

Provisions to protect minorities were also rapidly swept aside as majority ethnicities in the new states sought land, power, retribution and the safety of homogenised societies. Ethnic strife reached an apogee with the Greco-Turkish war of 1919-1922, which resulted in the expulsion of 400,000 Muslims from eastern Greece and then of 1.2 million Greeks from western Turkey.

In Tsarist Russia the agents of imperial disintegration were socialists not nationalists. The Bolsheviks supported national self-determination in theory but in practice constructed a centralised, socialist multi-national state. It was the internationalist Bolsheviks who carried forward the Hapsburg and Ottoman ideal – much admired by historians today – of multi-ethnic coexistence within a single political-territorial unit.

The Soviet Union was an affirmative action empire that encouraged cultural nationalism and ethnic diversity, as long as nobody over-reached themselves to challenge the communists’ authoritarian rule.

The February Revolution that toppled the Tsar was the first successful overthrow of a major authoritarian regime in Europe since 1789. If the Provisional Government that took power had been able to stabilise the country’s new democratic regime, the subsequent course and outcome of the first World War could have been very different.

Instead, events were changed radically by the return of the Bolshevik leader VI Lenin from exile in April 1917. His intervention in Bolshevik politics led to the overthrow of the Provisional Government a few months later. The spectre of communism really did haunt Europe as the Bolsheviks fought a civil war at home and pursued world revolution abroad. Revolutionary and counter-revolutionary violence, Gerwarth points out, was as important to postwar upheavals as ethnic conflicts. There were abortive revolutions in Germany, Hungary, Bulgaria and Finland. In Spain – neutral during the war – 1918-1920 were known as the “Bolshevik years”.

The nemesis of Leninist revolution in Italy was socialist-turned-fascist Benito Mussolini. His combination of populist electioneering and paramilitary organised violence culminated with his “march on Rome” in 1922. It became the model used by the radical right to grab at power in interwar Europe, not least by Hitler and the Nazis in 1933.

Together with Lenin and Mussolini the third towering figure of Gerwarth’s narrative is Mustafa Kemal, better known as Atatürk – the Father of the Turks. Atatürk came to prominence during the defence of the Gallipoli peninsular against allied invasion in 1915-1916 – a campaign celebrated as a great victory by the Turks. After the war he sought to re-found the Ottoman Empire as a secular Turkish state. While he was prepared to relinquish the Ottomans’ Middle East territories, he resisted western attempts to partition Turkey and reduce it to a rump state. Another outcast state – the Soviet Union – became an important ally in the military struggle against Greece, France and Britain when it settled its territorial disputes with Turkey and provided money and munitions for Atatürk’s cause.

The 1923 Treaty of Lausanne was a triumph for Atatürk as it overturned the draconian peace settlement imposed on Turkey. As Gerwarth writes, this “demonstrated that it was possible for a defeated state to become a victorious one”. Atatürk’s redemption by military force of territory lost as a result of the war was an object lesson for Hitler and the other authoritarian rulers of interwar Europe with irredentist ambitions.

Yet Atatürk’s treaty victory suggested reconciliation was possible, too. Indeed, by 1930 Greece and Turkey had signed a peace treaty and Greek prime minister Venizelos, who had launched the Greco-Turkish war, even proposed Atatürk for the Nobel Peace Prize. In 1934 Atatürk dedicated a war memorial to all those who had died at Gallipoli, not only the Turkish troops he had commanded.

The context of these events was the climate of international conciliation symbolised by the 1928 Kellogg-Briand Pact for the Renunciation of War – a treaty signed by more than 60 states. However, the Great Depression, the collapse of international economic order and war-mongering by Nazi Germany, Fascist Italy and Imperial Japan dashed hopes for a prolonged peace.

The Great War, as Gerwarth says, began a cycle of violence that continued to play out until after the second World War and in some parts of the world – notably the Middle East and Ukraine – continues to be worked through even today. Yet it also began an era in which peace was to become a universal value predominating over the promulgation of militarism and war. Even Hitler was constrained to claim he was a man of peace.

Gerwarth’s fascinating and finely crafted book is a rich combination of military, political, cultural and social history. He makes good use of literary sources and witness testimony to bring the events he narrates to life. While some parts of the story are more familiar than others, the book is replete with insightful observations. Aided by a large European Union grant, Gerwarth and his researchers in UCD’s Centre for War Studies have scoured archives and sources across Europe to produce an impressive work of highly accessible scholarship.

Geoffrey Roberts is Professor of History at University College Cork.