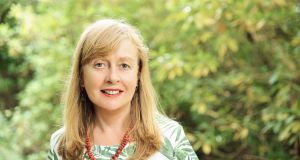 Breda Joy: “When you’re writing, it’s as if your mind doubles as a big scrap yard that offers up spare parts.” Photograph: Karina Murphy

The late Con Houlihan from Castleisland in Kerry was a gifted wordsmith and an exceptional human being. He once wrote that he was born in a blizzard, that he was a Sagittarius, a hunter of fish and animals.

To be a writer you have to be slightly on the edge of things, a little ill at ease with yourself and your place in the world. You’re an observer with a touch of the outsider about you. That said, Con struck me as a man totally at home in his own skin even though he was innately shy.

I like the outsider as a dramatic device in fiction. An outsider is embedded in the cast of characters as a voice or a light to throw into relief attitudes and practices that are commonly taken for granted by those rooted in place.

In my debut novel, Eat the Moon, I recruit Tamara, a young Londoner, to evoke the strangeness of life on her grandmother’s farm in Cork. In particular, she finds the dialect and the accent alien despite the fact that she has been somewhat prepared by her emigrant father’s manner of speaking.

The dialogue sparks (I trust!) with the flint of Hiberno-English, a variation of language that Con Houlihan termed “English woven on a Gaelic loom”. It’s the language I grew up hearing, one that is diluting with every generation.

They say that the landscape of a book is a character in its own right. While the plot and the characters of Eat the Moon come from my imagination, the setting draws heavily from the home farm of my late mother, Mairead, in Co Cork where every cow and every field had names.

As beautiful as my native Killarney is, I spent all my childhood summers on the farm. The tourist coaches would be pouring into Killarney while we were going the opposite direction on the old CIE bus.

Because I’m a jarvey’s daughter with a lifelong love of horses, it was only natural that a horse should emerge in one of the central roles in Eat the Moon. My father’s wealth of horselore informed much of my writing about the moon-silver horse, Apollo.

Another local man, Seamus Darcy, who is the last in the line of eight generations of blacksmiths, gave me very valuable insights too.

The story opens in the kitchen of a Cork family form as Neil Armstrong prepares to set foot on the moon. As the plot unfolds, the O’Mahonys find themselves figuratively hurtling away to the dark side of the moon.

Memories from my mother’s farm made their way into the work that was to grow into Eat the Moon, but I knew that the book needed to be more than a recreation of halcyon summer days. I hunted for a dramatic incident.

When you’re writing, it’s as if your mind doubles as a big scrap yard that offers up spare parts. You don’t consciously retrieve them. They surface on their own. And ideas and phrases that seem to be totally apart from you can emerge. This is the most magical part of writing – the spark that is ignited by something beyond you, an impulse that feels as if it is not of you.

Inspiration doesn’t come from locking yourself away from the world. Five years ago, I volunteered with the Killarney charity, Be Aware Prevent Suicide, set up by local woman Deirdre Fee to nurture mental wellness.

Through the charity, I came across outstanding speakers who personified grace in the face of adversity. The expletive-charged grace of a young Galway speaker, Shane Mullins, particularly hit home with me. The real heft and conflict of the plot of Eat the Moon grew from listening to Shane and to other remarkable people who fought their way back from their own variations of the dark side of the moon.

I have tinkered with poetry, fiction, nonfiction and drama for about 30 years, but my personal holy grail was to write a novel.

The motivation to get this book across the finishing line came from the Green Bean Novel Fair organised by the Irish Writers’ Centre. My strongest advice to any writer out there looking for a spur is to enter the Novel Fair.

The late arrival on the book shelves of Eat the Moon is nothing short of a miracle for this self-confessed “Queen of Procrastinators”. It took me quite a while to get here but I believe the book is all the richer for the delay. And I’m out there hunting words and ideas for the next one, as well as ducking the blank page more often than I should.