Found in Translation: Worldly short stories to broaden your horizons 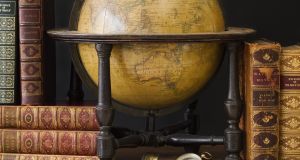 Frank Wynne says translators are “the beating heart that makes it possible for stories to flow beyond borders and across oceans”. Photograph: Getty

In 2013 Ethan Zuckerman, director of MIT’s Center for Civic Media, announced to the world an unsettling paradox. The internet age, which had promised a boundless utopia of global connectivity, was delivering not openness but closure. His extensive research on web and social media usage showed that users overwhelmingly accessed content in their own language, about their own culture and in their own geographical area. The electronic frontier was fast turning into the digital backyard.

The political consequences of this cyber narcissism were all too evident in the silo hatreds of the alt-right, rejecting the foreign, the migrant, the impure. It is in this context that the publication of a volume such as Found in Translation is to be welcomed. Frank Wynne, one of Ireland’s foremost literary translators, has put together an anthology of 100 short stories in translation, beginning in the 16th century with a deliciously perverse story, The Glass Graduate, by Miguel de Cervantes and taking us through to Clemens Meyer’s (born 1977) sober reflections in In the Aisles on lives caught up in the forklift dramas of industrial warehouses.

Wynne quotes Susan Sontag, who once claimed that “translation is the circulatory system of the world’s literatures” and Wynne adds that it is translators who are “the beating heart that makes it possible for stories to flow beyond borders and across oceans”. It is the translators in these pages who allow readers in the Anglophone world to venture beyond the firewall of cultural provincialism and experience the multitude of cultures and traditions and histories contained in languages only too rarely taught in our schools or discussed in our media. Bengali, Hindi, Korean, Hebrew, Croatian, Uzbek, Urdu, Albanian, Arabic, Indonesian, Turkish, Gikuyu and Azerbaijani are among the source languages for the stories in the anthology.

Irish is represented by Máirtín Ó Cadhain’s The Hare-Lip, a translation by Eoghan Ó Tuairisc of An Bhearna Mhíl, which has also appeared in William Trevor’s Oxford anthology of Irish short stories. The Russian, French and German masters of the form are included – Hoffmann, Hauff, Kafka, Maupassant, Flaubert, Chekhov, Tolstoy – but the emphasis is clearly on bringing as many voices as possible into this global polyphony.

Allure of the exotic

The danger in any anthology of this nature is the allure of exoticism. Stories can be selected as the literary equivalent of the “picturesque”, picking out features of a culture that are readily recognisable in their stereotypical difference. Wynne’s selection avoids this pitfall and instead the reader experiences a sense of the unfamiliar that signals difference without shading into cliche. There is a wonderful example in the story Child’s Play by the Japanese author Natsu Higuchi who wrote under the pen name of Ichiyo Higuchi.

In her story, which describes the coming of age of her heroine Midori, we get passages such as the following: “Take the autumn festival. Mother Meng would be scandalised at the speed with which they learn to mimic all the famous clowns; why, there’s not one of them can’t do Rohachi and Eiki. They hear their performances praised, and that night the smart alecks repeat their rounds.”

The foreign reader can guess at what is going on here but only partially. And it is this partial knowledge that makes the reader want to learn more. In the stories of Ryunosuke Akutagawa or Premchand or Jallil Mammadguluzadeh, there is both a sense of a shared empathy for common human predicaments (love, loss, injustice) and a feeling that there are many unknowns hovering on the threshold of our understanding.

In the remarkable long short story The Birch Grove by the Polish writer Jaroslaw Iwaskiewicz, beautifully rendered by Antonia Lloyd-Jones, the natural world becomes one of the main protagonists in dramas of lost lives and unrequited love. Stás, a consumptive who has spent time in sanatoria in Switzerland, returns home to his native Poland to die. For the non-Polish reader there is a distinct impression that these meticulously detailed landscapes are bound up with complex histories and traditions that go far beyond the narrative convenience of pathetic fallacy.

Difference comes, by definition, in many forms. What is also found in translation in this anthology is the world inhabited by the vast majority of its inhabitants. A world where money is tight, opportunities rare and happiness provisional at best. In the stories of the Bengali writer Sarat Chandra Chattopadhyay or the Swedish writer Mirja Unge or the Chinese writer Lu Xun, there is a lucidity about the small lives that get overlooked in the spreadsheets of business lounges. The stories represent a kind of cosmopolitanism from below, a finely detailed map of dispossession across continents that is in sharp contrast to the current cosmopolitanism from above, the endlessly curated gallery of global retail brands.

This is not to say that the stories indulge in miserabilism. As the Hungarian writer Zsigmond Móricz declares in the first sentence of his story, Seven Pennies anthologised here, “The gods in their wisdom have granted the benefit of laughter also to the poor”. An element of impish humour indeed makes its way into the short biographical notes accompanying each of the stories. We learn the exact number of Alexander Pushkin’s duels, the fact that Tolstoy made his shoes from thin strips of birch bark and that Chekhov’s last letter was to complain about how German women dressed.

The subtitle of Found in Translation is “100 of the Finest Short Stories Ever Translated”. This is an opening gambit rather than a concluding move. Given the vastness of the world’s literature the subtitle is more of an invitation than an affirmation. Few, for example, are likely to agree that the Thomas Mann short story The Path to the Cemetery included in the anthology is the finest story he ever wrote. In terms of their range and sensibility more likely candidates for inclusion would be Tonio Kruger, Little Herr Friedmann, Death in Venice or Tristan. The point, however, is not what is left out but how much gets in. More than 900 pages of translated fiction by some of the most able translators past and present (including DH Lawrence translating Giovanni Verga and Edith Wharton translating Enrico Castelnuovo) provide a compelling overview of the literary output of the planet. The publisher, Head of Zeus, is to be complimented on a handsome production. Unfussy typefaces, wide margins and good quality paper revive the pleasures of the well-made book.

Frank Wynne’s anthology reminds us that we are not condemned to languish in our cyber citadels. Translators are the travellers who let us into the secret that the cultural variety of the world is inexhaustible. What we might ultimately find in these translations is what we are permanently in danger of losing: our capacity to understand and live with difference.
Michael Cronin is 1776 professor of French at Trinity College Dublin and director of the Trinity Centre for Literary and Cultural Translation

Honourable discharge: Lee Child, Jack Reacher and the end of an era