The Doctor’s Wife Is Dead review: A gripping murder from Famine-era Ireland 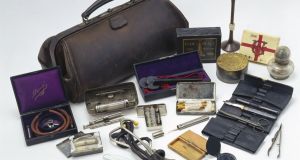 First, do no harm? Dr Charles Langley was a master of physical and psychological cruelty. Photograph: SSPL/Getty

Any librarian will attest that the cultured rural class have always had a hardy appetite for local history. They also like their murder mysteries, particularly ones involving gentrified stock. Tea-and-scones murder. Waistcoats-and-watch-chains murder. None of your slasher muck.

Andrew Tierney, a Nenagh-born archaeologist, is on to a winner with his first book, The Doctor’s Wife Is Dead, a nonfiction work with the pulse of a courtroom drama. The hook is planted in the opening pages: on the morning of May 1st, 1849, at the height of the Famine, a respectable doctor named Charles Langley sends a letter to his neighbour, the town coroner, requesting an inquest into the death of his wife, Ellen, after an illness that lasted some 12 days. So far so tragic. Except it transpires that Langley’s wife was still alive when he wrote that letter.

During the inquiry Langley petitions for a verdict of death by bowel complaint. The victim’s nephew, the wonderfully named James Jocelyn Poe, agrees, despite an earlier contention that his aunt had been poisoned. But the jury isn’t buying it. Nor are the townspeople, who are so incensed by Ellen’s death that they form a mob and storm the doctor’s residence as the coffin is carried out for burial.

Tierney’s book is a moving account of Ellen Langley’s squalid last days, but it’s also a study of Famine-era Irish society. Men dominate, be they grimly professional gents in tall hats and grey waistcoats or feckless scoundrels using women as chattel. Fans of Victorian fiction will revel in juicy period phraseology and colourful characters. (During Charles Langley’s trial the jury is horrified to hear that Ellen’s coffin, a “two and tenpenny” job, was left to sit outside in a yard for two nights.)

Ellen Langley is the book’s silent heroine, a spinster great-aunt, older than her husband by considerable measure at the time of their wedding. Tierney quotes a woman correspondent writing for the Dublin Inquisitor in 1821: “Having witnessed the decline of their youth and beauty without changing their condition [the unmarried spinster] must be content to pass the remainder of their days in that quiet state of ‘single blessedness’ which is often admired, sometimes pitied, and not infrequently despised.”

Charles Langley, on the other hand, was the scion of Protestant Tipperary wealth. The unlikely couple were married in December 1831. Langley proved by all accounts a temperamental monster of a man: violent, philandering, litigious and duplicitous in his business dealings, moonlighting as a moneylender on the side, not shy of exploiting paupers.

He was also, as Ellen learned to her cost, a master of physical and psychological cruelty. For the last two months of her life she was confined to a garret “as small as the black hole of Calcutta”, half-starved, isolated from all but the house help. At one point her husband entreated a local doctor to forge a certificate stating she had venereal disease, contracted, he claimed, from adultery with a servant, Thomas Pound. (Langley himself had carried on a year-long affair with Ellen’s own niece Anna, whom he eventually married.)

Having grievously slandered her, Langley then expelled his wife from the family home into the teeth of a cholera epidemic that was almost apocalyptic in its horror. This was no small plight for a woman accused of adultery in the age of Hawthorne. Tierney cites a contemporary pamphlet: “There are no sinners who, by the usages of the word, are so absolutely lost, so cast out of sight, so abandoned to the bitterness of their own tormented soul. A fallen woman the world counts it righteous to forsake and scorn. Even her own kindred turn their backs, and shut the door of home upon her.”

The Doctor’s Wife I s Dead is pure Celtic Gothic, and a real-life murder ballad on a par with Pretty Polly or The Banks of the Ohio. (The author concludes that it’s highly likely Sheridan Le Fanu’s story The Spirits Whisper was inspired by the Langley case.)

In the end the poor wretch at the heart of this dark tale is little more than a mute ghost. “Ellen Poe came to the notice of the general public only in death,” Tierney, a distant descendant of the subject, writes. “Over a century and a half on, much of what we can know, or can infer, about her life and her character comes from the testimony of others, mostly men, on the subject of her final illness and her suffering.”

It is to the author’s credit that he has, many years after her death, furnished her legacy with a proficiently written, deeply researched and entirely readable account of her sorry fate.