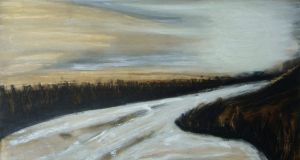 Debra Bowden, The High Road at the Berkeley Gallery in Thomastown, Co Kilkenny

Composition 2? Because number 1 was “I breathe, therefore . . .” It’s an improvised collaboration involving vocal compositions and “generative technological assemblages” made in and partly shaped by the gallery space. It’s also The Complex’s final show before moving to a larger space on Arran St East – not that far away – accommodating 22 artists’ studios, a larger gallery and a 400-seat venue.

The primordial Japanese motif of the circle, in the form of the sun and the moon, is at the heart of Bowden’s carved, painted and collaged woodblocks, in a show that also includes a Japanese garden installation. Bowden features as part of an extensive programme in the Thomastown Creative Arts Festival.

The example of the “model village” of Sion Mills, south of Derry, was the starting point for new works by four artists. They consider the mixture “of planning, social engineering, capitalism and utopianism” involved in the industrial philanthropy widely practiced in Britain and Ireland in the 19th century. The show includes video, painting, sound installation and textile works.

Perhaps better known as a portrait painter (not least thanks to his marathon three-year residency at Kilkenny Arts Festival), Mick O’Dea has consistently pursued a parallel path as a landscape artist. Clare-born, he has unsurprisingly been drawn to the West, from Clare northwards via Connemara into Mayo. Immediacy, spontaneity and energy are always evident in his work, across media and subject matter.

Diana Copperwhite and Aileen Murphy share an instinctive zest for high-octane chromatic painting, relishing the give and take of the process. Representations materialise in the midst of abstraction – perhaps more so in Murphy’s case. She is likely to anchor a painting to a central motif, where Copperwhite is more inclined to up anchor and move on.

Lifting the lid on paid-for politics
7