Looking at the Irish Border through hard and soft lenses

Reframing the Border, a survey of 14 photographers’ views, has an ominous relevance 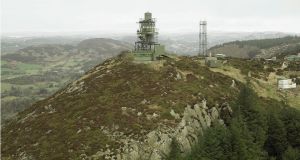 Reframing the Border was on view earlier this year at the Regional Cultural Centre in Letterkenny, Co Donegal. An ideal venue, geographically, for a survey show by 14 photographers, both well-established and emerging, whose work has, in one way or another, had a bearing on the subject of the Irish Border. Rather ominously, during the exhibition’s run in Dublin, the post-Brexit Border is as problematic, if not more problematic an issue, despite the fact that negotiations were projected to be at a more advanced stage.

There is a border of sorts, a dividing line, in Reframing the Border, between work that deals with the physical fabric of the border, its infrastructure and the implications that it has had for its adjacent landscapes, and the equally real but less tangible facts of what the Border means for those who live along it or near it, who habitually cross and re-cross. One couldn’t simply divide the work into one or other camp: interconnections are many, but the distinction between starting from an inner, psychological experience and an external world holds generally true.

Donovan Wylie’s celebrated series British Watchtowers, photographs of the observation posts constructed mostly in South Armagh, mostly during the 1980s, conspicuously concentrate on the infrastructure of the border – a strange infrastructure, but these ungainly, eccentric looking things were about as functional as they could be. The mountainous landscapes are nonetheless beautiful, their mottled greens and ochres recalling, appropriately, camouflage patterns. Wylie’s interest in “the concept of vision as power in the architecture of contemporary conflict,” is in tune with our contemporary concerns over surveillance, but there is something almost medieval about the idea of building a network of watchtowers, and their appearance. Wylie photographed the towers prior to their being dismantled. Who knows, they may rise again.

For Pillboxes, Aidan Pedreschi unearthed a set of features nestled almost invisibly in the landscape stretching westwards from the River Boyne. He cites the Irish government’s General Defence Plan No 2, drawn up during the second World War. Under the plan, pillboxes were constructed along a line of defence against a potential British invasion from across the Border. This fanciful plan seems even more unlikely when you learn that the pillboxes were constructed of poor-quality concrete and incapable of sustaining shellfire.

They are now hard to find, Pedreschi notes, and often not recognisable in terms of their intended function. But he tracked down many. It is but a short step to the surrealism of Seán Hillen’s Irelantis and LondoNewry collages. Originally drawing on the iconography of John Hinde postcards, Hillen’s collages point to the arbitrary nonsense of mental and physical borders alike. At their most pointed, they seem to present Northern Ireland as a preposterous construction of myth and fantasy.

In the mid-1980s Colm Tóibín set out to walk along the 300-plus miles of the Border in stages and recount his experiences. He was joined by photographer Tony O’Shea, and the book that resulted, Walking Along the Border, later republished under the title Bad Blood, stands not just as a document of a journey but a dense, multi-layered account of how the fact of the Border was woven into the lives of those along it in complex ways. O’Shea’s black-and-white photographs have a stark severity about them that is in keeping with the underlying mood of the text.

Jump forward and Kate Nolan’s ongoing Lacuna centres on a prolonged engagement with the village of Pettigo. A patient, empathic observer, Nolan gets inside the minds of her subjects, in that she manages to get a sense of their worldview. Similarly, with Drum: Portrait of a Village, Kevin Fox devoted a year to his exploration of the village of Drum, with the aim of gaining an insight in depth of a whole community.

Don’t look at the title and explanation and chances are you’d be hard put to say what exactly Ciaran Dunbar’s photographs of farms and farmland are about, beyond the obvious. They are about diesel, or the process of illegally laundering diesel that flourished in the Border regions when, as he notes, the manufacturing industries that had sustained a major part of the local economy disappeared. He specifically sought out sites where the noxious sludge produced when the dye is washed out of the diesel has been dumped. Locally, he notes, no one wants to talk about diesel.

The idea of histories invisibly wrapped up in the land is also relevant to the work of David Farrell and Patrick Kelly. Farrell’s renowned Innocent Landscapes documents the locations where searches for the “disappeared”, those abducted, killed and buried by the IRA in the 1970s and 1980s, have been systematically carried out. His images have a hard, forensic quality. For The Land of Milk and Honey, Kelly revisited sites used as IRA training camps during the 1970s. Raymond B Newman documents the state of the Orange Order in “an increasingly secular and diverse European island”.

Anthony Haughey shows work from his wide-ranging Disputed Territory, some of the photographs related specifically to the Irish Border. He is alert to signs in the landscape, and prompts us to look twice at what seems unremarkable at first glance. The impact and significance of borders change often, his work suggests, but they are at root sites of contention, capable of escalating so long as the border is there. Very simply and effectively, Nigel Swann finds an echo of a Bronze Age boundary, the Black Pig’s Dyke, in Co Fermanagh, in the present-day Border. Enda Bowe’s contribution is a lyrical juxtaposition of gentle portraits of young people on either side of the peace line in Belfast, Love’s Fire Song, and the backwoods, down-at-heel border landscapes of Searching for North. As Dragana Jurisic observes of herself, having grown up virtually on the border between Bosnia and Croatia, she has still settled in a country with “its own problematic border”. Her work is a reflection on this state of affairs, and includes a view of gunnera – an invasive species – on the Border.