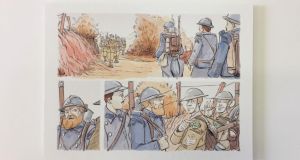 Olivier Cornet reckons he was about six years old when he first looked at his great-uncle’s album of photographs from the first World War. Although fascinated, he remembers that he had no idea whatever of the immensities of human suffering they implied – implied rather than documented since as an army photographer he worked according to a strict code of practice.

French casualties were not to be depicted, for example, nor were the shocking realities of the brutal, grotesque injuries inflicted on the human body by powerful munitions.

Fast-forward to a couple of years back and Cornet, settled in Dublin, where he runs an art gallery, happened to meet another Frenchman resident in Ireland, Léo Régeard (who works under the name Leyho), a comic-book artist who has also worked in animation. In time they worked together in relation to an exhibition on James Joyce.

At that point they discovered they had both had great-grand-uncles who had served in the French army during the first World War. Whereas Cornet’s relative, François Bost, had survived the conflict, Leyho’s, Francis Régeard, had been an infantryman from 1914 and was killed during the Battle of the Somme in 1916.

A young man with little experience of life, Francis kept a detailed notebook, a diary of sorts, recording his experiences as a soldier. This notebook came to light in 1921 when Francis’s sister Henriette was summoned to identify his body during exhumations at the site of the Somme. She confirmed his identity and was given the notebook. His remains were interred in a monument to the war dead in the family’s home place, the Breton commune of Bécherel.

Leyho’s father Jean-Luc is a keen amateur historian and he set about tracing Francis’s story, correlating his notebook entries with archival records. He concluded that Francis was most probably killed on his birthday, very late in the battle. The image of the foot soldiers being treated like dogs, which inspired the title Chiens Bleus, Chiens Gris (with reference to the respective French and German uniform colours), seems to come from the notebook.

Leyho, using the notebook and his father’s research as his main points of reference, and with crowdfunding support, set about making a comic-book account of Francis’s wartime experiences. The hardback comic book, which is a fine, extremely well-produced piece of work, is in the gallery as part of Chiens Bleus, Chiens Gris (on sale for a very modest €20).

While the book is there, on the walls you will find Leyho’s original coloured drawings, and they are excellent. Cornet had shown him Bost’s photographs, which helped in shaping a certain look, and making an imaginative leap. So too, Leyho has acknowledged, did the National Gallery of Ireland’s exhibition Aftermath last year, which consisted of William Orpen’s work – paintings and sketchbooks – as an official war artist.

Several of Bost’s photographs are also on view as part of the exhibition. In addition, Cornet approached Robert Russell at the Graphic Studio to go through the photographs with him and choose three to make editioned (25 each) photo intaglio prints from the originals.

One, an oval vignette, is a lyrical, dreamlike view of a French biplane in the clouds. It seems a million miles removed from the horrors proceeding routinely below, but is a reminder that the war was the first and by no means the last industrialised conflict.

Cornet is fairly sure that Bost put his photographic album together some years after the war. He suspects that some of the later ancillary information may be slightly out in terms of date and locations. Again, it is there in the gallery (you can leaf through it on request), and it is an extraordinary document in pristine condition – Bost was a skilled bookbinder, Cornet mentions.

Apart from several beautiful views of aircraft that appear as light as butterflies, there are many views of the earth below taken from the air. Time and again one comes upon expanses of landscape pulverised by shellfire, so that they are densely pockmarked with craters – moonscapes, as Cornet says. On closer inspection, one bleached tract, packed with clusters of dark impact craters, reveals lines of ant-like creatures negotiating the alien, hostile terrain.

They are, of course, humans, soldiers like Francis, and recognising this induces the sickening realisation that the odds are hopelessly stacked against them. For one thing, they are simply not equipped to cope with the scale of the destructive technologies they face – and that applied to those on both sides of the conflict.

For one of the intaglio prints, Cornet made a point of prioritising an aerial view in which a network of field boundaries is still visible, even as it is in the process of being obliterated by shellfire. He points out that this had been, after all, an agrarian landscape. One recurrent feature in the photographs is the large, incongruous presence of agricultural equipment of various kinds, co-opted to provide transport for arms and men.

With its judicious mix of document and image – Leyho’s original drawings, the intaglios, the photographic prints and the sturdily bound volume of photographs plus Francis’s meticulously written notebook, with capable diagrammatic sketches – Chiens Bleus, Chiens Gris is a fascinating, slow-burning exhibition.