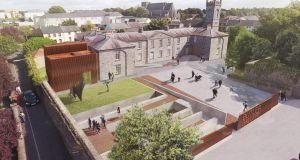 In a peaceful part of Rothe House, an atmospheric Tudor townhouse in the heart of Kilkenny, eight young architects are imagining what a future Kilkenny City might look like. Their drawings, plans and notes run a riot of thought and potential across a series of easel-type stands. Kilkenny Visions is the culmination of a project between the Kilkenny Arts Festival and the UCD school of architecture. It invited students on a course, taught by award-winning architects Sheila O’Donnell and John Tuomey, to create spaces in the heart of the city where culture might cluster and where performance and creativity take place.

The occasion of the exhibition is the Kilkenny Arts Festival, and there’s nothing like an arts festival to showcase a city’s cultural spaces, or show up the lack of them. In Galway, the recent arts festival once again demonstrated that while theatre is well taken care of – with venues ranging from the deliciously intimate Mick Lally Theatre at Druid, to the 400-seater Town Hall Theatre – the visual arts are out on a limb. Smaller shows can find a home at spaces including the Galway Arts Centre, but for large installations, such as those undoubtedly in planning for Galway 2020, there is nothing out there. This year’s installation, by Scottish artist David Mach, once again occupied the former Connacht Tribune Printworks Gallery, an atmospheric space on Market Street destined to become a hotel.

Kilkenny has the Butler Gallery for visual art, and while the Set Theatre and Watergate host performances, there are definite gaps. “The festival is unusual,” says director Eugene Downes. “Not just in Ireland, but internationally in the degree to which nearly all our key venues are non-conventional performing spaces. The church, the castle, an open-air courtyard, the gardens, Rothe House. Other European festivals based in cities, say Edinburgh, have an extensive network of cultural spaces. There’s no doubt the ephemerality is part of the magic, but it creates all sorts of challenges.”

But what do Ireland’s smaller cities actually need? Just over 20 years ago, in 1997, Frank Gehry’s glitteringly curvaceous titanium Guggenheim in Bilbao caused a mania among city planners for statement arts spaces that would, by their very architecture, attract visitors, boost economies and bring forth the elusive alchemy that puts a tired, rundown, former industrial city on the international map. It doesn’t always work. In West Bromwich, Will Alsop’s hot pink and black cultural venue, The Public, opened in 2009 at a reported cost of £72 million, and closed in 2013 when the local authority couldn’t keep up the running costs.

Back in Ireland, Carlow is home to Visual. Terry Pawson’s galleries are some of the largest and most beautiful in the country, and there is a strong annual programme of exhibitions, theatre and film. Yet the suspicion persists: is something on the scale of Visual quite what Carlow needed? If you build it, they won’t necessarily come; and if they don’t come, that’s hardly the programmers’ fault when geography and local preferences are at play.

Perhaps something like the Guggenheim Bilbao could only happen once, and only happen with the imprimatur of a well-funded household name behind it, and the deep pockets of a city, or regional government, determined to fund success. It remains to be seen if Jean Nouvel’s Louvre Abu Dhabi, which opened last year, can make the UAE capital a cultural Mecca.

Nevertheless, the terms “cultural quarter” and “creative quarter” are bandied about by planners with abandon. More frequently, they may actually mean designing spaces in which picturesquely affluent people can sip cappuccinos between hot desking or retail binges.

Kilkenny has both a cultural and a creative quarter in planning right now. The Cultural Quarter is centred on the new Butler Gallery complex, designed by McCullough Mulvin, on a site at the former Alms House on Barrack Lane, and due to be finished next year. According to Kilkenny County Council chief executive Colette Byrne, there are also plans to extend the adjacent Carnegie Library.

Meanwhile, the Abbey Creative Quarter is also under way. This is on a 16-acre, former Diageo-owned site, which was once the Smithwicks Brewery, and further back than that, a spot for monastic brewing. It includes river frontage on to the Nore and backs on to the Watergate Theatre. The county council documents on the project don’t always use “Creative” in the title, but Jason Clerkin of Abbey Quarter Development Limited says that creativity can mean many things, and he refers to the creative industries, such as Cartoon Saloon, which have made Kilkenny their home.

Byrne describes a mixed-use development, of residential and commercial buildings, with a riverfront park, walkways and a further park, which is, she says, “to be designed to incorporate a spot for a marquee”, to be used for cultural events. The site is intriguing, as it includes the medieval ruins of St Francis Abbey, as well as The Brewhouse, the only example of Bauhaus architecture in Kilkenny. The former will be surrounded by a park, the latter is being turned into office space.

All of this makes Downes’s intervention, to invite the UCD students to design a building or set of cultural spaces for the city, a timely one. “We hope that the student work will stimulate strategic thinking, suggest ways to unlock hidden potentialities, address limitations and provoke conceptual possibilities,” said Downes at a briefing in November last year.

Can a sketch of a building or architectural space do all that? Perhaps a better model is to look at how the right confluence of buildings, people, financial support, time and circumstance can make the cultural magic happen. O’Donnell and Tuomey are themselves no strangers to creating spaces for arts and culture: their buildings include Cork’s Glucksman Gallery, Dublin’s Gallery of Photography and The Photographer’s Gallery in London, as well as Belfast’s Lyric Theatre. The Gallery of Photography was built as part of the Group 91 (a consortium of architects) to recreate Temple Bar as a cultural quarter.

Today, much is made of Temple Bar’s inequities as a cobbled hell of superpubs, stag and hen parties. Yet it does house such cultural flagships as Project Arts Centre, the Irish Film Institute, Smock Alley Theatre and the Temple Bar Gallery and Studios. The issue is that those artists who were privately renting inexpensive studio spaces were forced out by the regeneration. Cities need rundown, or less “managed” inexpensive spaces, for unregulated creative thinking, of the type that truly innovates to emerge.

Kilkenny itself, as the lore goes, had “just the right amount of recessions” to preserve a great deal of its historic core, although depredations of contemporary planning, and our obsession with driving everywhere, have taken their toll. The architectural students in the Kilkenny exhibition turn their attention, in the main, to the Abbey Quarter site. Chloe Loh looks back in time to when medieval minstrels might have promenaded the original abbey, and imagines a Globe Theatre type venue, in which terraces and balconies offer spaces for performance and encounter. Nicola Blake’s deeply atmospheric watercolour sketches also show places of encounter, in this instance coming out of the lanes and slips for which the old heart of Kilkenny is famous.

The overriding sense is of sites for creative interaction being as significant as the performance venues themselves, however beautiful, dramatic or exciting they may be. It is not just the places, but the spaces in between that matter, and spaces for culture should be knit throughout a city. Alanna Holmes clusters houses around the Watergate, making an amphitheatre, so that living itself is an art, and is continuously exposed to art.

The proposals range from the practical to the fantastical. Ferdia Kenny looked at the existing buildings, trying, as he puts it, “to make Kilkenny more vivid, more of itself”. Kenny’s interest lies, he says, in the moments before and after a performance, and so he has made outdoor rooms, niches and overhangs. In Laura Doyle’s world, these are darker, shadier spaces; film sets for atmospheric dramas, perhaps. Ed Horan gets to grips with what the mechanics of theatre-making require, as does Stephen Gotting, who keenly understands how architecture can focus attention; while Janice Po explores how arcaded spaces make room for interaction on a human scale.

These descriptions do an injustice to the range and breadth of imagination of these projects, and one of the questions raised by this exhibition is how can young architects be enabled to keep their sense of creative vision alongside the strictures of professional practice. Contrast their work with the CGI drawings of the buildings ready to go into the Abbey Creative Quarter by Reddy Architects, who clearly know how to get things done. At Rothe House, the students’ projects range from atmospheric watercolours, to collage, to finely etched planning drawings. They will be displayed on boards because, at this arts festival exhibition venue, you can’t attach anything to the walls.