Five art shows to see in Ireland this week 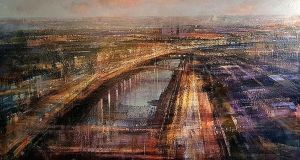 Róisín White: Lay Her Down Upon Her Back
The Library Project, 4 Temple Bar, Dublin Until August 26th photoireland.org
Róisín White uses found photographs and archival material to tease out the nature of relations between women and the medical profession, starting from the legacy of the 1880s treatment known as The Rest Cure, prescribed for women judged to be “of nervous disposition, anaemic or hysterical”.

Bríd Higgins Ní Chinnéide and John Behan: A Moving Journey
Hamilton Gallery, 4 Castle St, Sligo Until September 1st hamiltongallery.ic
Both Ní Chinnéide’s paintings and Behan’s sculptures hinge on movement. The human figure in motion is at the heart of her work, a metaphor for life, and Behan’s bronzes and constructed pieces are charged with dynamic energy, as with his Wild Swans at Coole, caught on the wing in a flurry of action.

Alex Cecchetti: At the Gates of the Music Palace
Void, Patrick St, Derry-Londonderry Until September 22nd derryvoid.com
Though still apparently active, Alex Cecchetti’s bio lists 2014 as the date of his death, but then the Italian artist, poet and choreographer has always pushed the boundaries. This installation, curated by Mary Cremin, is a 3-D concert involving performance, drawings, painting, sculpture and sound installation, putting the visitor at the heart of the experience. With Daryl Martin.

Cristina Bergoglio: Urban Sensations
The Doorway Gallery, 24 South Frederick Street, Dublin August 9th – 30th thedoorwaygallery.com
Argentine artist Cristina Bergoglio originally studied architecture but has gone on to paint, though her subject matter is still architecture: she makes expansive views of cities. Her aim is not so much to depict structures – buildings and bridge – as to convey something of the character of cities, including Dublin, as vast, living things.