Chloe Early: ‘Without family, we are all lost at sea’ 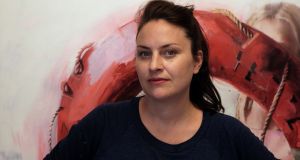 Chloe Early with her print, ‘Compass’, in the background. The work will raise money for a charity which helps refugee mothers.

“I was thinking about the Mediterranean sea and how one place can have such different associations depending on who you are and where you are standing. A place of leisure, escapism and beauty to most Europeans and yet a place of fear, danger and possible death to many of the refugees trying to cross the sea to reach Europe,” says artist Chloe Early, speaking about a new print she’s working on to raise money for the Nurture Project, a non-profit that sends midwives and support for mothers to crisis zones.

Since graduating from NCAD in 2003, Early’s artistic star has skyrocketed. Working in oils on aluminium, her colour-saturated, dream-like paintings have accrued a list of sell-out shows in Dublin, London, Los Angeles and New York and celebrity patronage from heavyweights such as U2 and Alicia Keys.

Early lives and works in London now with her husband, Conor Harrington, a fellow artist who is also from Cork. Harrington is successful in his own right, thanks to his punchy oil paintings and street murals which have been outselling Banksy and breaking sales records at auction houses. A rare twofold success in the art world, the couple, who Early assures me, “are very low key and hardly get a glimpse of the party scene in London”, welcomed their first son, Séamas in 2014.

Séamas’s arrival was a joyous occasion, but motherhood has been a steep learning curve for Early, “The whole notion of having any time now is so abstract – you have to carve it all up so finely as a family unit to try get that illusive balance. I went home a lot to Cork to stay with mum and Conor’s family when Séamas was very young, especially when Conor was away with work, which I found really hard to deal with, but eventually, we got into the swing of it.”

After 14 months at home, she first dipped her toes back into work for three days a week and loved being back at the studio and the buzz of east London, but felt guilty about leaving her baby behind, she recalls. “That’s the thing with motherhood, it takes you to places of extremes – love and guilt, joy and despair. It challenges the breadth of our physical and emotional beings.”

When Early was on maternity leave she recalls, “it was impossible to ignore the non-stop backdrop of mainstream and social media coverage of the Syrian refugee crisis”.

One relief agency, the Nurture Project, which provides healthcare, midwives and technical lactation and nutrition support to breastfeeding mothers in crisis situations, kept popping up on her social feed. “I was breastfeeding Séamas at the time and kept thinking, for those of us lucky enough to be doing this in the comfort of our own homes, it is one thing, but for those brave women trying to feed their babies, raise their children and build a life in peace whilst fleeing wars, I cannot imagine their strength.”

She contacted the Nurture Project and ended up in a refugee camp in Thessaloniki last year where she encountered thousands of displaced mothers, “who were just like me, holding a small baby in their arms, yet they were so alone and in limbo”.

One mother who particularly stood out during her stay at the camp was called Hijrah. “Originally from Iraq, she was in her late 20s I’d guess and was studying to be a doctor before the war broke out. After her husband went missing, presumed dead from a bombing, she paid smugglers to help her and her kids escape to Europe. She wrapped her pregnant self and her three children together with a rope for their boat journey from Turkey to Greece as she believed if they died on the journey, it would be better if they all died together than being separated. That rope ended up saving her, as the boat did topple at one point and none of them could swim. Another pregnant refugee who was also on the same boat, gave birth during the crossing, and gave Hijrah her new-born to mind too as she feared she would not survive the passage,” recounts Early.

Fortunately, all of the women and children made it to Thessaloniki, but Early was deeply affected by their stories, “I cannot unknow and unhear the things she told me and despite the depths of despair her story reached, the devotion she displayed towards her kids amazed and inspired me.”

When Early got back to the studio in Brick Lane, where she works in one wing and Conor in the other, “an old lifebuoy ring which I picked up in a market somewhere caught my eye. Here was this circle of life, literally, and a symbol of the danger of death at sea. It became the focal point of my painting, Compass, in which I’ve tried to represent the all-encompassing love and devotion that go into a mother’s relationship with her child. As families, we are each other’s compass, our north, south, east and west.”

Compass is just the beginning of the next journey for Early, “It’s a prelude to my next show, which focuses on motherhood, childhood, families and that infinite relationship. I’m going back to work full time in September and Conor is going to step into the primary parent role for a while. I’m hoping to have enough work ready to do a solo exhibit next year in London.”

Are there more babies on the horizon for Early and Harrington or a move to the States perhaps? “Conor would probably like to live in the US but it’s not on the cards right now. London is a manageable distance between work, my dad [who lives in London] and going home to our families in Cork. Right now, I need to focus on the show and create some art first. Going to Greece has made me realise just how lucky I am with the set-up and family I have. Without family, we are all lost at sea.”

Limited edition screen prints of Compass, (840 mm by 700 mm, £350 each), of which 50 per cent of profits raised will be donated to the Nurture Project, are available to buy now at chloeearly.com