A massive newspaper installation, a contemplation on childhood, and a musical project from Calais

More than 200,000 people are expected to attend this year’s Galway Arts Festival, here are some of the highlights from week one. Video: Joe O'Shaughnessy 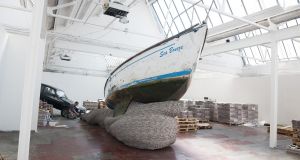 There’s a bittersweet tinge to the synchronicity of the three shows sharing Galway International Art Festival gallery this year. The sprawling wreckage of David Mach’s tsunami-like installation; the dawning awareness of Jennifer Cunningham’s adolescents as they contemplate the fading of childhood and the transience of its playful havens; Sarah Hickson’s documentation of The Calais Sessions, the episodic, momentary musical respite that enlivened the grim conditions of the refugee “Jungle” at Calais. All three projects dovetail in feeling and in physical presence. Over several years, the curatorial and production team at the festival have learned how to use a fine venue to best advantage.

The venue is the former print works of the Connaught Tribune, a capacious industrial structure in which the main space is blessed with the generous natural light bestowed by a saw-tooth roof. During its time devoted to cultural use – a time not yet exhausted, one hopes – the interior has been remade several times, if never more elegantly than for this year’s festival. The clock is ticking, though, and it seems inevitable that the building, sold some time ago, will be replaced by a commercial enterprise. The words “boutique hotel” have been mentioned, not for the first time in Galway raising the question of the extent to which you can alter a place before you eradicate the reason visitors want to be there in the first place.

Mach’s superb Rock’n’Roll acknowledges the building’s former role (the pipes that fed ink to the presses are still visible, even though the presses are long gone). Not for the first time, he’s made a monumental piece that uses the stuff of newspapers as a medium. A gigantic wave of newsprint surges from fractures in the concrete floor, carrying and roughly depositing a yacht, a Ford Capri and a caravan, together with other fragmentary debris, across the space. It’s hard not to think of footage and images from the tsunami that devastated the Pacific coast of northeast Japan in 2011, or perhaps comparable natural disasters. But Mach is not representing one or other event. He is drawing on our collective awareness of such events.

It’s metaphorically rich territory. The damage may have been wrought by a tide of misinformation, say, or technological change. Styles and forms of technology can be left high and dry by unpredictable shifts and innovations. Patterns in global manufacturing can change, even ruin, local industrial landscapes in the blink of an eye. Conflicts can uproot populations and destroy communities and societies. Mach’s work doesn’t represent any one of these themes or events, but it is at home in and reflects the world they shape, the world we inhabit.

Sarah Hickson first travelled to Calais to photograph The Calais Sessions in December 2015, accompanying “an eclectic group of musicians and sound engineers”. They brought “instruments, portable sound gear and a generator” and set up an open stage in the camps, inviting musicians to play, sing, speak: allowing them to have a voice, essentially, at a time when they had none. Hickson reports that, in truly dire conditions – a wet, freezing winter, inadequate shelter, poor sanitation – she found “a powerful sense of society”, an improvised society, among people from many different locations, cultures and background circumstances.

In Sounds Unseen, her images straightforwardly document a great deal of this. She describes them as making up a photographic memoir. Over a six-month period she returned several times as the sessions resumed. By the time of her final visit, in the spring of 2016, the systematic destruction of the “Jungle” was under way. The sessions emerge as a fine, practical enterprise on the part of the UK musicians and technicians and La Grande Synthe in Dunkirk and a reminder that local, personal initiatives can and must count for something in the face of grinding geopolitical manoeuvres.

Jennifer Cunningham’s After the Future extends her outstanding show at the RHA’s Ashford Gallery last year, All That Surrounds Us. In her beautifully made mixed-media works on paper, Cunningham evokes a post-industrial landscape of dereliction, but of a very particular sort. She observes “the ways in which modern realms of collective pleasure decay”, more often than not characterising witnesses to this decay in a way that recalls those bemused, coolly dispassionate protagonists in the dystopian novels of JG Ballard. Except that Cunningham’s viewpoints are female, of an indeterminate age, but spanning childhood through adolescence.

In a way, there’s a dual, interchangeable narrative running through her work: the dissolution of the physical fabric of the recreational landscape, and the psychological progression from the utopian magic of childhood imagination to a dawning awareness of change, loss, complication and limitations. Less this sound prescriptive, these ideas emerge seamlessly and organically from, rather than being imposed upon, her work.

Many of the precisely described structures we see in her images are drawn from her native Galway and are instantly recognisable, though not a Galway familiar to most visitors. Images emerge from preparatory washes of colour and have an hallucinatory or dreamlike quality. She has also moved very effectively into dramatised video, with Glass House, and miniature three-dimensional maquettes.