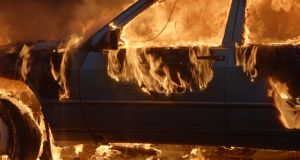 Remains is a 15-minute colour video installation by Willie Doherty, made in 2013. As a camera pans slowly across a grim, deserted utilitarian urban space – a private car park, perhaps, or an anonymous yard, rough and gritty – a male voiceover narrates a chilling account of being ordered to present his son, and his nephew, at a specified time, presumably at the location we are looking at, for a punishment shooting. The source is a series of such shootings carried out in 2012 by a dissident group, Republican Action Against Drugs. As the morose commentary proceeds, the speaker recalls undergoing a similar experience himself when he was younger. The video concludes with a view of an abandoned car burning fiercely on waste-ground.

We are left with an impression of the intergenerational, cyclical nature of violence and perhaps, more figuratively, of the paralysing lack of political progress underlying the real gains in Northern Ireland following the Peace Process.

Doherty’s work has generally been rooted in his native Derry and its hinterland, including the expanses of Co Donegal to the west. His early photo-text pieces showed a contested space, variously defined by the labels projected on to it by observers, depending on their political and cultural identities and the historical perspectives and priorities they exemplified.

From the early 1990s he began to work with video installation, always returning to the same terrain but with an increasing focus on the psychological complexities involved in long-term conflict and its toxic legacy, the moral compromises induced by extreme circumstances and the tensions of unresolved issues. Texts, usually in the form of reflective, monological narratives, precise but open-ended, with literary and dramatic influences, came to play a vital role.

Doherty has always shown great feeling for non-picturesque and urban landscapes and brought high production values to his work.

Remains (number 2 of an edition of 3) is in the collection of the Irish Museum of Modern Art since 2014. It is currently on view at the Regional Cultural Centre, Letterkenny, Co Donegal (until September 22nd, regionalculturalcentre.com)

It is typical, even to the extent of employing a familiar Doherty trope – the burning car, a simple but telling symbol of futility. Born in 1959, he is one of a generation of Northern artists who grew up in the context of the Troubles. He was a witness to the events of Bloody Sunday (which he has treated directly, including in his video Ghost Story, which featured at the Venice Biennale in 2007) and he was acutely aware of being in the media spotlight as someone living in the midst of a conflict, and of the pressures of identity, surveillance and allegiance. All of these considerations have shaped the evolution of his work.

Around the time of the Good Friday Agreement, it seemed that there was the possibility his oeuvre might be overtaken by events but, as the narrative of Remains suggests and current developments confirm, little or nothing has been learned and Northern Ireland still appears tied to a corrosive past and unable to fashion a more positive future.