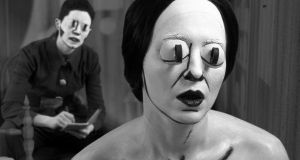 It’s unlikely that you have seen anything quite like the short films of Mary Reid Kelley and Patrick Kelley, not least because the mongrel form they have devised – a strange, hybrid amalgam of live action, sculptural installation, verse, animation, graphic art and surrealism – is so strangely itself. Many other streams feed into the mix, including classical and Victorian literature, silent movies, slapstick, mime, cabaret, passionate amateurism, the theatre of the absurd and the iconography of gender. The works crackle with the kind of energy you find in the earliest films, with their air of improvisation, over-the-top theatricality and willingness to just give it a go.

It seems fair to describe Reid Kelley as embodying the driving creative force in the collaborative enterprise. As well as their professional connection, she and Kelley are married. She writes the densely textured verse scripts, with the exception of her use of an Algernon Charles Swinburne poem in one film, Swinburne’s Pasiphae, and Henry Wadsworth Longfellow in their most recent, In The Body of The Sturgeon, which forms the centrepiece of their forthcoming exhibition at the Butler Gallery in Kilkenny, I Smelled A Raw Recruit.

As regards her writing, which has an easy, rolling rhythm and some dizzying imaginative acrobatics, she has noted her debt to Lil’ Kim (“a genius”) and Nicki Minaj who, she said, taught her “how to rhyme on the inside of a line”. Her own efforts, she suggests, are more “versifying” than poetry. She draws many of the settings used in the films. Often, her live actions are performed against green screen, with animated additions. She sources the costumes and props, and she plays all the parts – not, as she says, that she’s a great actor or anything, it’s a different kind of performance. Kelley trained in photography and initially his role was purely technical, including the green screen wizardry, though over time he has assumed a more active involvement in the visual character of the films.

Born in Greenville, South Carolina, Reid Kelley, starting from a background in painting, studied at St Olaf College, Minnesota – as did Kelley – and completed a Master of Fine Arts at Yale in 2009. Her work has consistently engaged with the experience of women in various historical contexts, often through the introduction of a woman’s voice into settings or domains in which women were, historically, excluded or their role ignored and elided. Hence her interest in the experiences of nurses, prostitutes and factory workers. She was, for example, amazed and dismayed to find little or no documentation on the experiences of women sex workers during the first World War. Often she has zeroed in on moments of upheaval, such as the French Revolution and the first World War, elucidating: “How law and politics make women’s lives what they are.”

Didactic, then? Up to a minimal point, but you really have to see the actual work to get a sense of the offbeat, jagged, cartoonish humour, the terrible puns (which she once neatly described as “verbal cubism” while admitting that they are also a compulsion) and the general irreverence. In one of their most celebrated pieces, a performance that also exists in video form, It Is Offal (that is indeed a pun, by the way) Reid Kelley plays the role of a corpse laid out for postmortem examination, a woman in Victorian London who has died by suicide. As, she learned, happened a lot. A major source was a poem, Bridge of Sighs, by Thomas Hood, a meditation on such a suicide. But It Is Offal takes a surreal turn as the dead woman is figuratively reanimated: her organs argue bitterly among themselves, bickering and assigning blame. Rather than letting Hood speak for her, the woman declines to fulfil her role as mute victim and object of wistful – and male – romantic fantasy, and is her truculent self.

Raw Recruit gathers “the World War films”. That is, Sturgeon, which is set aboard a US submarine towards the end of the second World War, and three shorter, earlier works set during the first. Her interest in the Great War began with an exploration of Yale alumni who had perished in the conflict and developed into a realisation about the problematic, largely erased role of women. Reading the war poets – male, needless to say – encouraged that line of thought but also initiated her into writing poetry, something she had not done until that point. In Sadie the Saddest Sadist, Sadie, who wants “to be a modern girl” goes to work in a munitions factory to aid the war effort, meets a sailor, Jack, and, primarily for patriotic reasons, has sex with him and contracts gonorrhea: “Britannia waives the (moral) rules,” she puns. The implication being that women are exploited on numerous levels but denied any voice or rights.

You Make Me Iliad locates Reid Kelley in the role of a prostitute during the first World War, seen through the eyes of a soldier-poet – again, it is the men who get to write the poems, the novels and the history books – in search of a tragic heroine, a role she is not prepared to play. Interviewed by Eva Fischer-Hausdorf in 2016 she said: “I often find myself caught between admiring a male writer’s poem or book of philosophy, and amusing myself with the inapplicability of that work to myself as a woman, or perhaps to the historical female peers of the writer. It is a gap that is a great invitation to imagination, and also to parody.”

In The Queen’s English, a nurse working in a tent hospital tends to horribly wounded and dying patients. But, something ingeniously visualised, it is the patriotic rhetoric that dominates, notionally easing but actually eclipsing and betraying the reality of human suffering and injustice. “I love you darling,” as the nurse’s lulling monologue intones late in the film, “the way a Dutchman loves a dike, the way a woman needs a man that needs a fish that needs a bike.”

Apparently inspired in part by the German submariner television series and film Das Boot and in part by encountering a submarine in dry dock, In The Body of the Sturgeon is set in the claustrophobic crew quarters of the fictional submarine the USS Sturgeon, somewhere in the Pacific towards the end of the war. In this case the setting is a physical construction rather than an animated backdrop: not quite Hollywood but a significant move in terms of the duo’s usual production process.

The sailors are understandably going out of their minds, clinging to whatever means of imaginative escape are possible. Those means include curvaceous pin-ups, books, alcohol – as the alcohol is torpedo fuel, that does not go well – and impromptu entertainment in the form of a drag act. It is worth remembering that the sailor in drag, complete with a bra comprising two metal funnels, is played by Reid Kelley. That is, a woman portraying a man portraying a woman. A performer to her core, at a later stage she is also president Harry Truman announcing the dropping of the atomic bomb. The verse we hear throughout is not Reid Kelley’s but Longfellow’s epic The Song of Hiawatha. Despite the fact the war is nearly over, USS Sturgeon is doomed by a chance encounter with a mine.

As to why Reid Kelley tends to play every character, she suggests that while her and Kelley’s work is often seen in terms of film-making, that’s not the best way to look at it. Nor is it wise to parse and analyse too much. Rather, she suggests, she’s more like a comedian or a musician who writes and performs her own material. Some alchemy happens along the way. Like many performers, when she is herself she seems not remotely given to the kind of exuberant display that performance has to involve. She is, on the other hand, exuberantly creative. And, as she reminded one interviewer, Jacquelyn Gleisner, the cardinal rule of comedians is: “Never explain your jokes.”