Art in Focus: ‘River to the Sea’ by Norah McGuinness 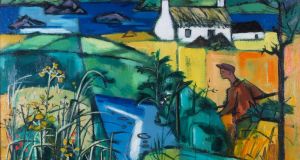 River to the Sea (1959) by Norah McGuinness: she studied under Harry Clarke and her signature style is easily recognisable.

How was it done?
McGuinness was an adept pictorial organiser with a bold, crisply articulated graphic style. Painting was closest to her heart but she was active across and proficient in a range of related disciplines as well, including illustration, window display, and set and costume design. Here she employs a simplified Cubist methodology to convey an idyllic rural scene in a brisk arrangement of flat planes, playing fast and loose with conventional perspective and suggesting multiple times and viewpoints.

Where can I see it?
River to the Sea is included in Signals of Change: Paintings from the Crawford Art Gallery’s Great Southern Collection at the Hunt Museum in Limerick (until September 2nd, huntmuseum.com). Mostly acquired during the Arts Council’s Joint Purchase Scheme (a 50:50 arrangement) in the 1960s and 1970s by CIÉ, who until 1985 ran the Great Southern Hotels, and on view in the hotels, the collection makes up a good cross-section of mid-20th century Irish art. Alarm bells rang when the subsequent owners of the Great Southern group, the Dublin Airport Authority, moved to sell the hotels and looked for valuations on the artworks. Since both CIÉ and the Arts Council were State-funded, then minister for arts John O’Donoghue pointed out, the art really belonged to the people. The DAA readily assented and the collection was duly passed on to the care of the Crawford, which had recently been granted national institution status.

Is it a typical work by the artist?
McGuinness’s signature style is distinctive and easily recognisable. Born in Derry in 1901, she moved to Dublin to take up a three-year scholarship at the Dublin Metropolitan School of Art. Her tutors included Harry Clarke, who became a good friend. Picking up on her innate ability, he nudged her towards illustration and won her a commission to illustrate Sterne’s A Sentimental Journey through France and Italy. Her work won critical acclaim, but by then she’d spent a year at the Chelsea Polytechnic in London. There she was bowled over by French Impressionist and Post-Impressionist painting and that led her to prioritise painting. Not that she gave up illustration, which was a consistent and important strand of activity for her throughout her exceptionally productive working life (her family, though financially comfortable, disapproved of her career path, but she seems to have been cheerfully and efficiently self-sufficient from her early 20s).

With Mainie Jellett’s encouragement, she went to Paris to study with André Lhote, as had Jellett and many other Irish artists. McGuinness easily assimilated his academicised form of Cubism, but she never became as ardent a devotee as Jellett. Artistically, her significant influences were Braque – perhaps surprisingly her favourite painter – Raoul Dufy and the fauvist Maurice de Vlaminck. Some of her work can come across as formulaic, even slick, but at her best she excelled across a range that encompassed portraiture, still life, interiors and landscape, and the Great Southern Collection features a particularly strong selection.

She married Geoffrey Phibbs (later Geoffrey Taylor) in 1924, but they divorced in 1930. A keen traveller and an immensely social, popular person, McGuinness loved the theatre and designed sets and costumes for the Abbey and the Peacock (appearing on stage at least once). For a long time, she also designed the window displays for Brown Thomas. A founder of the Irish Exhibition of Living Art in 1943, she became its president after Jellett’s death the following year. She died in Dublin late in 1980.