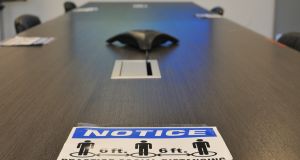 New ways of working, reduced costs and digital transformation of businesses are just some of the positive results of the current crisis, a new survey has found.

However, Irish employees were less optimistic when it came to their employer prioritising safety over business needs, with more than two-thirds saying they believed the company would prioritise business continuity, compared with 52 per cent of European workers. Some 52 per cent of Irish-based executives agreed with this, significantly higher than the 37 per cent recorded in Europe.

The survey, which was commissioned by digital workflow company ServiceNow outlined Covid-19’s impact on work and the opportunities for digital innovation in the workplace and in business. It questioned executives and employees across 11 countries, including the Republic.

Some 59 per cent of Irish employees do not believe their company will take the necessary steps to ensure their safety, compared with 43 per cent of Europeans.

But it wasn’t all negative. Some 96 per cent of executives in Ireland and 93 per cent of employees said their company transitioned to new ways of working faster than they thought possible. That was above the European average, the survey showed.

“The world’s dramatic pivot to working digitally is showing everyone what the future of work looks like,” said ServiceNow chief executive Bill McDermott. “Digital workflows are the way business gets done in the 21st century. There’s no going back. Digital transformation will accelerate. New ways of working will become the norm. We are on the cusp of an unprecedented wave of workflow and workplace innovation.”

While companies have embraced remote working, the impact on the business moving forward is of concern to 90 per cent of Irish executives and 86 per cent of employees, with output delays and reduced collaboration among the chief worries.

“Covid-19 caused businesses across Europe to change at a pace, the like of which we have never seen before and, if honest, many didn’t think was even possible” said Mark Cockerill, a Dublin-based ServiceNow vice president. “There is much talk of adapting to a new normal, but the reality for most businesses is there is just the now, and the constant change that comes with it. The critical challenge for European organisations will be balancing the immediate need for business continuity, with the personal needs of their employees, and making sure they are both digitally ‘match fit’ for the wave of change yet to come. Focussing on digitising the work that needs to get done, wherever that needs to happen, will be a key in creating this balance.”

The Work Survey included 9,000 executives and employees across industries including financial services, health care, telecommunications, manufacturing, and the public sector.