Kathy Sheridan: Sniping between Government and Nphet has to stop 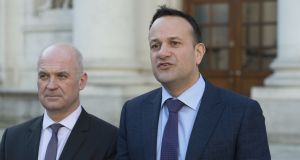 Taoiseach Leo Varadkar and Chief Medical Officer Tony Holohan. It’s no secret that Government and Nphet meetings have hardly been a hive of harmony up to now. Photograph: Dave Meehan

The spectacle of a man hopped up on cheap steroids gloating that he hasn’t felt better for 20 years might be funny if the person in question was not the Covid-infected president of the United States, the man entrusted with the missile launch codes and the welfare of 330 million people in a deadly pandemic.

Such is the wired-to-the-moon effect of that tiny dexamethasone pill that a big induction topic in the oncology ward in my time was how to time your doses to come down from it for a few hours’ sleep.

But the energy effect is illusory and short-lived. If his symptoms are as mild as he claims, Trump shouldn’t be on them in the first place.

Our problem is that whatever happens, the Trump virus has already leached its pathogens into the wider world

As for claiming the Master of the Virus title, Trump might have tried a little truth and humility instead. Unsurprisingly, about seven in 10 people trusted little of what they heard from the White House about his health, according to a CNN poll.

Our problem is that whatever happens, the Trump virus has already leached its pathogens into the wider world.

Look no further than the armed, anti-lockdown “militia” that occupied the Michigan house of representatives a few months ago. One flag was strung onto a fishing line below which a naked brunette doll dangled from a noose. The doll reflected ongoing threats against Democrat governor Gretchen Whitmer. It distilled everything we know about Trump.

The forest of flags, the assault rifles, the symbolic lynching of a female governor under armed threat, the constitutional fundamentalism bound up in their twisted version of the Christian faith. A glance at our own anti-mask/anti-lockdown/anti-vaccine/anti-abortion/anti-immigrant marchers – the belief system of several overlapping groups is a head-melting mash-up – reveals our own version of Michigan.

By rejecting Nphet’s recommendation, all three political leaders have taken a momentous decision

The nooses depicted on banners, the national flag harnessed as a weapon, the calls to a perverted “patriotism” and “freedom”, the “paedophile” smears, the in-your-face aggression, the casual defiance of the law (see the video of “protesters” casually smashing Garda barriers near the Custom House a few yards from powerless gardaí). All stolen mob-handed from the Trump psyche and injected into Irish life.

The indifference to public health concerns is a direct copy of Trump’s King George tribute act. The powerlessness and fear induced in onlookers also serve a destabilising purpose. It is no small thing to stoke up the fear, sadness and deep fatigue of people already pushed to the limit in a pandemic where lives and livelihoods are at stake.

To this might be added the alarming Nphet letter suddenly catapulted into the public psyche on Sunday night.

The kernel of Leo Varadkar’s barnstorming riposte to Nphet on RTÉ’s Claire Byrne Live was that the letter hadn’t been thought through, that its authors had no understanding of what a Level 5 lockdown would mean to fearful people on PUP benefit with jobs at serious risk, that there hadn’t been the customary advance warning or meeting. What was not clear was how it came to be published without the usual heads-up or whether it was just a calamitous Nphet communications failure at several levels.

With its usual assumption of good faith, a large section of social media decided it was leaked by a minister, possibly the Tánaiste himself. And while he made his case powerfully and convincingly, Varadkar’s ’s problem is that he is noted for publicly sniping at and undermining others in the Government.

It’s no secret that Government and Nphet meetings have hardly been a hive of harmony up to now – it would be more disturbing if they were – and that the relationship rhythm has changed. But right now, people desperately need to trust their skills, professional judgment and ability to talk to each other. Real damage has been done.

Just when it needed unity of purpose, the country is split down the middle. People are evenly divided on the issue of a whole country Level 5 lockdown according to a Claire Byrne Live poll. The response to the Tánaiste’s interview was split. There was high praise for straight-talking, decisive leadership on the one hand, on the other, deep misgivings about his tone and eye-watering take-down of Nphet.

By rejecting Nphet’s recommendation, all three political leaders have taken a momentous decision. This is a matter of life and death. The sniping has to stop. Opposition politicians can seek accountability without carping endlessly about “confusion”. Smartphones are ubiquitous. Facts are easily checked. The basic rules remain.

Perhaps we needed to be reminded that it’s not about them. It’s about us – wearing masks, washing our hands, staying physically (let’s ban the cuddly “socially) distant and not becoming a Trump tribute act.