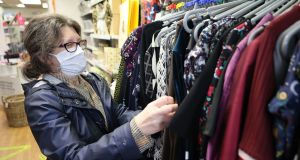 Strong political, medical and scientific calls were issued on Wednesday for people not to be complacent about the threat from Covid-19 as the incidence of the virus remained at a high level in Northern Ireland.

As the North’s Department of Health in its daily bulletin on Wednesday recorded 828 new cases of coronavirus, the Deputy First Minister, Michelle O’Neill, warned: “We are in a very grave situation.”

She told the Assembly’s Committee for the Executive Office that the latest figures were “seriously worrying in terms of the exponential rise in positive cases and alongside that the number of people who have been admitted to hospital”.

First Minister Arlene Foster at the same meeting accepted that people were “fed up” with Covid-19 but insisted Ministers were not “crying wolf” about the seriousness of the situation.

The Department of Health reported one more Covid-19 death, bringing the total number to 586. The number of confirmed virus cases since the start of the pandemic now stands at 16,187.

It’s a two-fingered salute to the rest of us, to the medically vulnerable and to our health workers

In the past seven days there were 4,417 new cases in the North. The highest incidence continues to be in the Derry and Strabane council area, where there were 637 cases per 100,000 of the population in the past week.

Currently there are 106 patients in hospitals receiving treatment for Covid-19, with 14 of them in intensive care units and 11 on ventilators.

The Northern Ireland Executive is to meet on Thursday to discuss a timeline to ramp up the restrictions.

The Minister for Health, Robin Swann, at a separate press conference, accused “the minority” who were ignoring the masking, social distancing and other rules to try to curb the spread of the disease as engaging in “wilful complacency”.

“In fact, it’s a two-fingered salute to the rest of us, to the medically vulnerable and to our health workers,” he said. “If we want to get through this we have to follow public health advice.”

The chief medical officer, Dr Michael McBride, said there is a “rising trajectory” of cases and hospital admissions. “We are only two short weeks away from seeing hospital admissions as high as they were back in March,” he warned.

He added: “It is our actions and decisions in the coming days that will determine how bad that situation becomes. It is too easy to forget how quickly the figures rise and how rapidly the rising cases can impact on our already-stretched health service.”

Dr McBride called on the “armchair experts out there to stop peddling the mistruth this is just a simple flu”.

The chief scientific officer, Prof Ian Young, said while there were 106 Covid patients now in hospitals, that figure could double every seven or eight days.

Meanwhile, the North’s Minister for Finance, Conor Murphy, announced a £350,000 scheme to support hospitality businesses in the Derry and Strabane area where greater Covid restrictions apply. Small businesses can apply for an £800 grant to cover the two-week period of restrictions, with larger businesses eligible for £1,200.

Mr Murphy and the Minister for the Economy, Diane Dodds, warned that a wider increased lockdown would not be viable without increased financial support from the British government.