Dr Tony Holohan, the chief medical officer, said that “all key indicators of the disease have deteriorated further” in the three days since the last meeting of the National Public Health Emergency Team. Video: HSE 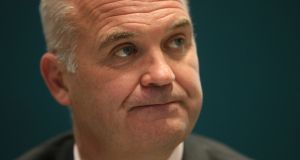 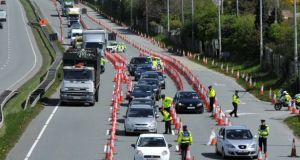 Taoiseach Micheál Martin has confirmed that the Covid-19 oversight committee of senior officials is looking at the possibility of fines as part of stronger enforcement of Level 3 restrictions for motorists who breach county boundaries. File photograph: Dara Mac Dónaill

A total of 611 new cases of Covid-19 have been diagnosed in the State and five further deaths associated with the disease have been reported to the Department of Health.

Of the new cases, 59 per cent are in people under 45 years of age and 50 per cent are confirmed to be associated with outbreaks or are close contacts of a confirmed case. A total of 83 cases have been identified as community transmission

Dr Tony Holohan, the chief medical officer, said that “all key indicators of the disease have deteriorated further” in the three days since the last meeting of the National Public Health Emergency Team (Nphet) on Sunday.

“We are deeply concerned by the change in the path of this infection,” said Dr Holohan.

He was critical of the leak on Sunday of Nphet’s recommendation that the entire State should go from Level 2 to the most severe lockdown Level 5 of restrictions to combat the spread of Covid-19.

“We conveyed our findings, analysis and recommendations to the Minister for Health and onto Government.

“They required early and serious confidential discussion. That didn’t happen because the information leaked into the media on Sunday evening.”

He defended the decision to restrict pub opening hours because of the risks from people mingling after a few drinks. “This virus loves alcohol.”

He said whoever had leaked the information did not share the objective of dealing with the disease as Nphet and the Government did.

Dr Holohan was giving his first media briefing since returning from an extended period of leave taken for personal reasons, and since Nphet recommended on Sunday that the State should move to Level 5 restrictions.

That recommendation was not followed by the Government, which instead instituted Level 3 restrictions across the State.

He thanked Dr Ronan Glynn, his family, and colleagues who he said had worked hard during his absence.

Professor Philip Nolan, the chair of the Irish epidemiological modelling group, said there was “no county where the incidence is not of concern”.

He said Nphet is “seeing very high incidence” among younger people, but also cautioned that there is significant growth among older people. At the beginning of September, the incidence in older people was 10 to 15 cases per 100,000 people above the age of 65, but now it is about 30 cases.

With nursing home infections also increasing, he warned that older people are significantly vulnerable if the disease spreads widely. “We simply cannot protect people in that age bracket, nor can they protect themselves, if the level of disease in the wider community continues to rise.”

He said the reproduction number, which needs to be below 1 to suppress the disease, is likely around 1.2. However, he said this is flattered by Dublin’s performance. “Frankly, the situation is somewhat worse than that”

He said the number in the capital is likely around 1, and in the rest of the country is around 1.5. “The disease is spreading very rapidly, particularly outside Dublin.”

Even in the capital, he sounded a note of caution over the idea that the virus was stabilising, saying: “We’ve been fooled by temporary reductions in case numbers in Dublin in the past.”

Asked about his views of Tánaiste Leo Varadkar’s criticism of Nphet over its recommendation that Level 5 restrictions be imposed, Dr Holohan said he had spoken with Mr Varadkar on Tuesday night, and that he had a “long standing good relationship” with him. “He understands and shares my analysis, every bit, and has as much concern about it as I do.”

He said he is “absolutely satisfied” that the air has been cleared between them. “Government has to make decisions on a range of other factors that are outside our area of expertise, but we still have a sober job to do to make the continuing assessment of the disease,” he said.

“He and I had a very good discussion last night that went on for a considerable period of time. We discussed issues of recent days, but we discussed and spent much more time discussing the disease and what we need to do collectively to enhance our collective ability as a country to respond to it,” he said.

Asked if he ever had considered his position in recent days, he said: “I’m around a long time, and I have a thick skin and I’ve been involved in plenty of issues over the years. We wouldn’t be doing our jobs collectively if there wasn’t cut and thrust and debate and all that. None of it is every personal, and none of it every saps my will to continue with the important job that I have.”

Dr Holohan and other members of Nphet emphasised the seriousness of the situation facing the country.

“What I have to get across is the seriousness of the situation that we’re in. I’m really genuinely worried and concerned about the stage of the disease. We’re now beginning to see exponential growth, not only in the case numbers but in many of the indicators that result from the impact of the disease,” he said, adding that the projections were not inevitable if behaviours were changed, but they would become so if they did not.

“It is clear that as a country, we haven’t been doing as well in keeping up those standards of behaviour which is part of the reason we find ourselves in the challenge that we have,” he said.

“The real concern over the summer has been the quantum of socialisation, and all of the different ways that happens and how much that has driven the opportunities for the virus to spread, and the virus has taken those opportunities.”

Meanwhile, Taoiseach Micheál Martin has confirmed that the Covid-19 oversight committee of senior officials is looking at the possibility of fines as part of stronger enforcement of Level 3 restrictions for motorists who breach county boundaries.

Speaking in the Dáil, Mr Martin said the Government is “ particularly concerned about Northern Ireland” and the consequences of traffic coming from the North.

He said it was a “significantly challenging situation for the North in terms of the very high numbers” of coronavirus cases.

“Clearly [THERE IS]the overspill into the Republic” and there could be consequences from that “so we have to deal with that”, he told the Dáil.

The oversight committee was “looking at the whole area of fines for example, in terms of traffic and so on”.

He also said there had been 17,000 new claims for the Pandemic Unemployment Payment (PUP) already since the midnight introduction of Level 3 restrictions.

Earlier, it emerged that the Government is considering introducing graduated fines for those who travel between counties for non-essential reasons following a meeting of senior officials this morning.

Officials have warned of a “huge increase” in those applying for the PUP, with warnings that the figures could increase by 60,000 by Friday with the entire country now on Level 3 of the Government’s plan to deal with the pandemic.

The Covid-19 oversight group, which consists of the most senior civil servants in each Government department, met on Wednesday morning to consider enhanced enforcement of restrictions across business, education and wider society.

A senior source confirmed that it examined graduated fines for those travelling between counties for non-essential reasons.

Sources said that the level of fines had not yet been set but that it would be enough to be a “deterrent” for those contemplating flouting the domestic travel restrictions.

The group also discussed new plans for an emphasis on compliance across shopping centres, sports and gyms.

Third level education will also be further examined in terms of compliance. It was agreed at the meeting that there would be more concentrated messaging on social distancing and non-congregated settings.

Officials also discussed a “huge increase” in those applying for the PUP. Estimates of increases up to 60,000 by Friday alone were suggested by senior sources. An economic overview was given warning of the “deep impact” new restrictions were having on the hospitality sector.

The group also discussed concerns around nursing homes and increasing rates of infection.

The oversight committee is chaired by the State’s most senior civil servant Secretary General to the Government Martin Fraser. Its role is to “provide advice to Government on the strategic economic and social policy responses to the management of the disease and to consider the Nphet advices”.