Covid-19 checkpoints and traffic congestion were ‘sharp shock’ to motorists

Long traffic jams were reported on Wednesday as gardaí mounted Operation Fanacht checkpoints across the country to enforce tougher coronavirus restrictions to stop the renewed spread of the virus in Ireland. Video: Bryan O'Brien 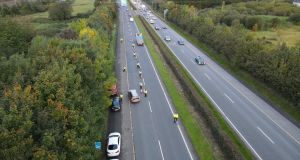 Gardaí have set up checkpoints on motorways in conjunction with coronavirus regulations. Photograph: An Garda Síochána/Twitter

Senior Garda officers believe the first day of checkpoints nationwide and resulting traffic congestion was a “sharp shock” that made it clear people should not be travelling outside their home county unless absolutely necessary under the new Covid-19 restrictions under Level 3 that came into force at midnight on Tuesday.

More than 130 static checkpoints erected on Tuesday on motorways and other arterial routes around the country were due to be switched to the opposite side of the road this afternoon. It means motorists delayed on Wednesday morning would face the same disruption in the evening.

Thousands of other mobile checkpoints were also being erected or more minor roads all over the country. Garda sources said motorists planning to avoid main routes in a bid not to be delayed by the Operation Fanacht checkpoints “will be left very disappointed”.

Traffic updates issued by AA Roadwatch reported a queue of vehicles up to 8km on the N7 westbound from J2 Kingswood to J5 Athgoe, where a checkpoint was located.

Other locations where lines of traffic were described as either “very slow” or “very heavy” included the M11-M50 near Bray, Co Wicklow, westbound on the M4 between J5 Leixlip and J6 Celbridge as well as J15 Kiltiernan southbound on the M50 to the Bray-Fassaroe area on the M11.

Garda officers believe the congestion on Wednesday, leading to additional 45 minute delays in some parts of the country, would dissuade many of those who decided to travel today from doing so again tomorrow or coming weeks during the period of Level 3.

Officers who spoke to The Irish Times were effectively unapologetic about the long traffic jams caused in some parts of the country, saying Garda Commissioner Drew Harris had on Tuesday warned very clear that delays were inevitable.

And while the Garda did not yet have figures proving a fall in traffic on the roads during on Wednesday, a number of sources said the anecdotal evidence from those manning the checkpoints was that traffic volume was down.

Other Garda sources reported a mixed reaction from motorists at checkpoints, many of whom had been forced to queue for up to 45 minutes due to the traffic jams caused by the operation.

“Some were glad to see us and understood we needed to be out there but you had other people who were more irate. But a lot of the reaction was reasonable; they seemed to be expecting it,” said one officer.

Gardaí familiar with the operation of the checkpoints said while not every vehicle was stopped and all drivers spoken to, a very large number were engaged in conversation and asked where they were going.

The same sources said because the advice to people not to leave their home county was set out in statutory instruments it was written in law and so gardaí were entitled to stop people and quiz them about their movements, even though no penalties arise for those who ignore that measure.

The Government on Monday decided that all counties will join Donegal and Dublin in Level 3 of the five-level Living with Covid strategy for the next three weeks until October 27th.

Level 3 means tighter controls on everyday life as the numbers contracting the virus and needing hospitalisation continue to grow.

A further 432 confirmed cases of Covid-19 were reported by the National Public Health Emergency Team (Nphet) on Tuesday evening. This brings to 38,973 the total number of cases of the disease in the Republic. One further death was reported, bringing the total number of deaths to 1,811.

Under Level 3 people are asked to stay inside their county unless they have to travel for work, educational or other essential purposes. Visits to houses are restricted to a maximum of six from one other household while weddings and funerals are capped at 25 people.

Tánaiste Leo Varadkar warned at a Fine Gael parliamentary party meeting on Tuesday night that a short lockdown may still happen despite the Government rejecting this week the advice of the National Public Health Emergency Team (Nphet) to move to Level 5.

Mr Varadkar went on to say that advice had not been “thought through” and criticised Nphet after the news emerged on Sunday night without consultation with the Government in advance.

However, sources present at a meeting of the Fine Gael parliamentary party on Tuesday night said that Mr Varadkar warned that a circuit-breaker lockdown may still be on the horizon.

“He basically said that a circuit breaker lockdown might, or might not work, but left us under no illusions that it is on the horizon,” said one source.

On Monday, in an address to the country from Government Buildings, Taoiseach Micheál Martin sought to balance the demands of public health with the need to “protect lives and livelihoods” warning that a return to lockdown “would lead to the loss of hundreds of thousands of jobs”.

The country was in “a very different situation to last March”, he said, and warned that “severe restrictions now would have a very damaging impact” on the economy.

Mr Martin’s statement represented a sharp rejection of the advice from Dr Tony Holohan and Nphet to implement Level 5 measures, following a day which saw fierce criticism throughout Government of the chief medical officer.