Ageism at work is irksome and makes no business sense 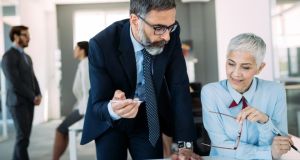 Older workers may be more expensive, but experts say they outperform younger ones on almost every measure of job performance. Photograph: iStock

Have you seen this year’s global list of 60 top entrepreneurs over 60? What about the best novelists over 50? Or the winner of the old scientist award? No? That’s no surprise. These things scarcely exist.

If you want to know about 30 entrepreneurs under 30, though, look no further than Forbes and its annual list of hot young trailblazers. For 40 under 40, go to Fortune. Lists of best young novelists have been around for more than 30 years. Prizes for young scientists are dished out by everyone from Google to the European Union.

There is nothing wrong with recognising youthful accomplishment. Young people shackled with explosive student debt and soaring rents in gig economies need all the help they can get. They should be inspired to achieve and their successes should be celebrated. But the same should apply to older people, too.

Who gets a disproportionate slice of venture capital money? The young

For one thing, more of them are expected to keep hobbling into work as generous company pensions fade and state retirement ages rise – along with life expectancy.

On top of that, if the over-50s are not kept gainfully employed, the OECD reckons the number who will need to be supported by each worker could jump by about 40 per cent in rich countries between now and 2050.

The effect on living standards and public finances would be grim. So it makes a lot of sense to dangle the odd bauble before this greying cohort and give it something to look forward to.

It is often left to officialdom to make these offers and the results, I fear, are mixed.

As a resident of London, I can look forward to a free bus pass once I turn 60, which is excellent. In places like my native Australia, turning 50 brings a far less cheering government birthday present: a free kit in the mail to test yourself for bowel cancer. Give me a mention on a Forbes entrepreneur list any day.

I have to admit I had always thought entrepreneurship was a young person’s game. It isn’t. Older people have been starting new businesses at a higher rate than those in their twenties and thirties in the US for years. And they tend to be more successful, even in the tech sector.

A large US study showed last year that, among the fastest-growing new tech companies, the average founder was 45 at the time the outfit was born. Runaway success was nearly twice as likely for a 50-year-old entrepreneur as a 30-year-old. Yet who gets a disproportionate slice of venture capital money? The young.

This could be smart business: younger people are usually poorer so investors might favour them in the hope of getting a larger stake in their business. Or it could be that investors have been swayed by those Forbes lists and the myth of young founder genius. Put another way, they are ageist.

It is only 12 years since Facebook’s chief executive, Mark Zuckerberg, told an event at Stanford University that “young people are just smarter”. He was 22 at the time, but still. Imagine replacing “young people” in that sentence with “white people” or “men”.

Ageism is doubly irksome considering the state of today’s over-60s. They are better educated than their forebears and considerably more durable. A 65-year-old American today has the same risk of getting horribly ill or dying as someone in their mid-fifties a generation ago.

Older workers may be more expensive, but experts say they outperform younger ones on almost every measure of job performance. They are more conscientious, less absent and have better social skills.

They also stick around. The length of time American workers in the 55-64 age bracket stay with the same company is more than triple that of those aged from 25 to 34. So it is a mistake to think investing in the young will be repaid by longer tenure.

Yet companies that crow about their commitment to diversity will happily reserve internal fellowships and other career-boosting opportunities for the young. Or plaster the career sections of their websites with photos of glossy youths that deliver an unmistakable message about the preferred age of employees.

This needs to change. Finding ways to keep older people happily employed for longer helps everyone – not just those who have discovered that growing old is the one thing that, with luck, happens to us all. – Copyright The Financial Times Limited 2019

1 Chris Johns: Boohoo exposed on pay and conditions in digital economy
2 In this strangest of recessions, what happens next for Ireland?
3 Michael O’Leary is the boss you want to lead an airline out of crisis
4 Hotel bookings collapse in wake of additional Covid restrictions
5 Should I switch bank now with Ulster Bank at risk of closing?
6 Estée Lauder staff at Dublin airport plan further strike action
7 Bank of Ireland sees about 2,000 staff apply for voluntary redundancy
8 Air travel never going ‘back to way it was’
9 Best Covid-19 ‘influencers’ will avoid hectoring
10 EY Entrepreneur of the Year: nominee profiles
Real news has value SUBSCRIBE