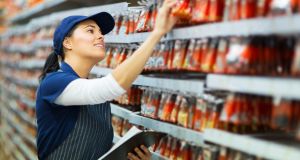 The average length people stay in retailing jobs is 4.4 years. With the millennial population it’s less than three years.

Next month sees the launch of Retail Ireland’s apprenticeship in retail supervision. It’s aimed at those working as supervisors in any sector of the retail industry and it’s designed to help them upskill and gain a professional qualification at Level 6 in the NFQ (National Framework of Qualifications).

It’s also part of the drive by Retail Ireland to develop better-defined career paths to address the traditionally high rate of staff turnover in the sector.

More than 285,000 people are employed in retailing in Ireland, making it the largest private sector employer in the State. Retailing is also among the biggest contributors to the Irish exchequer.

There are roughly 37,400 businesses operating in the sector in the Republic with about 70 per cent outside Dublin. Most are small, employing fewer than 10 people. One of their perennial problems is staff retention, not least because their structures can be complex with a mix of part-time, full-time and casual staff.

There has also been a reluctance by many to invest in people who are “just passing through” and this has created a self-perpetuating problem around retention and the appeal of retailing as a long-term career.

“Retailing has always suffered from a higher staff turnover than most other sectors, with the greatest rate of attrition among those in frontline roles,” says Thomas Burke, director of Retail Ireland.

“The retail industry has not been good at creating career progression pathways for people and it has paid the price in terms of the loss of experience and the time and money associated with rehiring. The apprenticeship is one of the initiatives we’re taking to address this.

The first intake will have 120 people and Burke says there has been strong interest in the scheme from both large and small employers. There is no cost to either side, apart from the fact that the employer has to allow the person 26 days off to attend the course. However, as much of the course material as possible has been put online to minimise travel and time away from work.

Burke says people often “fall” into a career in retailing, in many cases seeing it as something to do before you do something else. He wants to change that and create a situation where people will choose to enter the sector because it offers them good career development opportunities.

Attracting and retaining talent is also a top priority for Nicola O’Driscoll, people director for Brown Thomas and Arnotts, which employ 3,500 people year round, with an additional 1,500 joining the ranks for the Christmas period.

“We are very committed to investing in the sustainability of the business from a people perspective and try to lead that from the top with strong two-way engagement between staff and senior managers,” she says. “The average length people stay in a job is 4.4 years and with the millennial population it’s even lower, at less than three years. This is an issue for all employers.

“We’re trying to stabilise this turnover with initiatives such as our Future Leaders and Emerging Leaders programmes which are designed to keep key people in our organisation,” O’Driscoll says.

“Putting people through these programmes creates a greater talent pool for promotion and it also gives them something specific to aim for. We were inundated with applications for the programmes which run for 18 months and are a mix of practical skills such as communications and presentation, masterclasses in areas such as finance and mentoring and coaching by senior people within the organisation.

“The programmes are open to everyone across the business, and the selection process is less about length of service and more about experience and how well people fit in with the values that underpin our business such as flexibility and agile thinking.”

The programmes kicked off in May of last year and so far none of the participants has left. O’Driscoll says there has already been positive payback in terms of having more engaged and confident team members.

Recognising that priming the talent pump as early as possible is critical, Brown Thomas and Arnotts offer paid internships to college students across a mix of disciplines from digital and HR to marketing and buying.

“The internships have been very successful in that they have given us a pipeline and a number of those who interned have decided to make a career with us,” O’Driscoll says.

“Of course, we want them to stay once they get here so we are trying to make career progression within the organisation as interesting and exciting as possible with a mix of initiatives. These include the leadership programmes already mentioned but also the chance to go on secondment to a different role and the opportunity to join Leap which allows people to transfer to or to have a secondment within our wider organisation internationally, with Selfridges in the UK for example. On top of this there is the appeal of getting to work with world-class brands, many of which also offer top-class training.”

1 Opioid executive admits to ‘no morals’ ahead of prison term
2 Are there annual limits on inheritances or gifts to a child?
3 Smurfit brothers set for €77m payout in Powerflute takeover
4 EU banking watchdog describes rejection of Cross nomination as ‘unfortunate’
5 Former ‘Irish Independent’ journalist awarded €55,000 by tribunal
6 Apple’s Irish company structure key to EU tax finding
7 Coming home to west Cork, from all over the world
8 Microsoft sued by 'frozen out' ex-worker
9 Financial payments group Planet in rumoured €1.98bn sale
10 The end of the world could be upon us. Why are we doing nothing?
Real news has value SUBSCRIBE