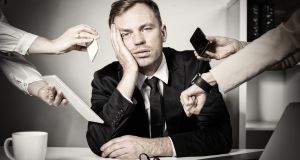 ‘Employees can’t be innovative if they are so overworked that they don’t have time to think.’ Photograph: iStock

One of the depressing realities of returning to work after a well-earned break is an overflowing inbox. In a split second the relaxed holiday feeling disappears as you face the output of an “always on” business culture that has filled your mailbox in your absence. What’s even more annoying is that only a fraction of the mails are still relevant: meetings have passed and pressing issues will have been dealt with.

It’s at times like this that working for German vehicle maker Daimler looks very attractive. Five years ago, as a result of research the company commissioned into work-life balance, it launched a pretty radical email management solution that offers employees the option of deleting all incoming emails while they’re on holiday.

The person sending the mail gets a polite note telling them it won’t be read, the name of someone to contact if the matter is urgent and a request to send it again after such and such a date. Apparently senders are more envious than annoyed by this policy.

Another initiative that came out of the same research was to set periods of time aside during the working day or week when no meetings can be scheduled so that people can get on with what they need to do uninterrupted or take a few hours out with no pressure.

Car manufacturer Volkswagen was one of the first big European organisations to ban out-of-work emails. It configured its servers to only send mails from half an hour before the start of the official work day to half an hour after the end of it. In France the “right to disconnect” is enshrined in law, and companies with more than 50 employees are required to set out the hours within which employees are not expected to send or answer work emails.

In Ireland, there are no laws to protect people’s right to disconnect but the push for them is gathering momentum. The latest to join the chorus is the Financial Services Union, which is urging the Government to press ahead with legal restrictions on after-hours e-contact with employees.

The union says intrusion into people’s downtime is creating significant stress and fuelling a crisis in mental health. The union’s acting general secretary, Gareth Murphy, says official action needs to be taken to protect workers’ rights because the employers at the root of the problem are not going to tackle it without prompting.

What may change that, however, is when it starts hitting them where in hurts – in their pockets. There has already been an increase in legal actions for workplace-related stress while the always-on culture is also beginning to have an impact on hiring and retention. As savvy employers have discovered, younger millennials and those who are succeeding them don’t buy into the idea of a 24-7 business culture and it is fast becoming a minus when hiring.

Ciara McLoughlin, employment specialist and partner with DLA Piper Ireland, says that stress claims linked to burnout and a lack of work-life balance are on the rise. Her advice to employers is to do something about it before it’s too late.

“Employers talk about the importance of innovation and how it fosters and drives growth, but what is becoming increasingly apparent is that employees can’t be innovative if they are so overworked that they don’t have time to think,” she says. “A lot of stress claims for burnout are settled. It’s bad publicity and sometimes the settlement sum is viewed by the employer as a reward for the pre burnout years when the employee may have been a high performer. But that’s responding to an existing problem, not tackling the root cause.”

McLoughlin believes employers need to become much more engaged in monitoring people’s hours (particularly if they are working remotely as it can be difficult to spot distress at a distance) and looking at the “why” behind consistently long hours. “Is the overwork a problem with the individual, is it a resourcing issue or is it a part of the organisational culture that needs to change?

“You can’t build a sustainable high-performance culture if you’re losing people to stress-related illness such as depression and anxiety, or people are leaving because the pressure is just too much. Organisations and managers need to realise that respecting people’s right to disconnect is not incompatible with high performance.”

Part of McLoughlin’s job is going into client companies to reinforce the importance of safeguarding employee wellbeing before it escalates into something major such as a claim for psychiatric injury. “Stress claims are going to become an even bigger issue for employers over the next few years and, with the ‘disconnect movement’ started in response to digitalisation and the imbalance between online and offline lives, it is something employers need to prepare for by actively encouraging switch-off time and managing people’s workloads,” she says.

What seems clear, however, is that the disengagement process is not as simple as flicking the off switch. Smartphones and other devices have accustomed us to instant reaction and the lines have become blurred as to when this tips over into the unacceptable. In many cases, this is as much an issue for individuals who compulsively check their devices as it is for the organisations they work for.

Getting the detachment people now say they want is a two-way street, but it will only happen when both sides change their expectations about responsiveness.

The perils of the mixed coronavirus couple