‘We have a great, musically filled life here in Nashville’

Wild Geese: Donegal musician Danny Burns toured around the US before settling in Nashville 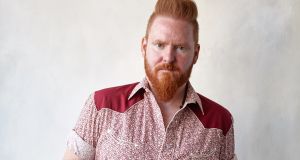 Originally from Ballyshannon in Donegal, Danny Burns always had an interest in music. “I was raised in a family of working musicians, so I was surrounded by singers and instrumentalists, receiving a first-class education in Irish folk music along the way.”

After studying outdoor activities at Regional College in Letterkenny, he toured around the northwest of Ireland playing gigs in pubs and small venues.

“I had no interest in school or outdoor pursuits, I just wanted to have something in the bag. For me it was always about music.”

The Big Apple called in 2000, and Burns picked up work in bars across the city.

“My family had lived in New York in the eighties and early 1990s. We lived in the Bronx, and Bainbridge areas before moving to New Jersey, close to where the character Tony Soprano is from.”

It was here, he picked up the guitar for the first time. “My mother was a music teacher, so it was in my blood. At home, music was a communal experience. We’d play songs, then pass playing a song, It was a great way to spend my formative years.”

He lived there until he was nine, before moving back to Donegal. “When I was growing up, my eldest brother went to college in New Jersey so we’d visit him also in the summers. I was pretty familiar with things out here and, luckily for me, I had a green card.”

In September 2001, Burns, like everyone living in New York was left reeling when the World Trade Center was attacked. “I stayed with friends in the Bronx, but then two days afterwards I went to Midtown and there were no people, it was like a sci-fi movie. No noise in the city and just soldiers on the streets.”

Soon after, Burns moved to Chicago and onwards to Washington, ending up in New Orleans where he was a “working musician” for almost 10 years. “I recorded with folks like George Porter jnr, Mean Willie Green, the Neville Brothers, while gigging on the famous Bourbon Street, Kerry’s Irish Pub, the House of Blues and more famous music spots. It’s the best city in the world.”

His time in New Orleans was marked by hurricane Katrina, which struck in August 2005. The category 5 hurricane killed more than 1,800 people and caused over €120 billion in damages. “I evacuated to Chicago and when I returned, it was like something out of O Brother, Where Art Thou? Everyone was covered in mud and neighbourhood houses had dead bodies in them. It was horrific.”

In 2010, he met his former sweetheart, musician Aine O’Doherty, also from Donegal, in New Orleans. They married and now have two children. “My wife also has a green card and plays music, which is handy.”

The couple moved to Maryland, but continued touring and making music, before relocating to Nashville, where they currently live. “We have a great, musically filled life here, with lots of great options for going out.”

Burns recently had also some chart success with a few singles in Bluegrass charts and and a top 10 charting single Great Big Sea featuring Tim O’Brien. His record label has also submitted them for a Grammy nomination consideration for this year’s Grammys for best album in Americana category, bluegrass and folk.

“We’ve had some great reviews and premiers from Rolling Stone, American Songwriter, Billboard, No Depression, CMT which has been awesome and helped with touring and getting the word out. We’ve been all over the country playing everything from venues to bluegrass festivals and even the Kennedy Centre.”

In between, Burns also recorded with “some guys from a band called The Fray” in west Hollywood and is signed to Atomic Music Agency in Nashville “who keep us busy with shows”.

He advises any young musicians coming out to “figure out your realistic goals and dreams and find your scene”.

“I’ve worked in studios in LA, New York, New Orleans, Memphis, Chicago. I think you need to find your genre or scene where you feel you fit in. The artistry and talent level is very very high in these markets – especially Nashville. You can hear it all.”

Burns insists Nashville is a great place to be, containing the very finest players and best studios and engineers. “It’s also more affordable than say New York city or LA or London.”

Rents in Nashville are “okay” compared to Ireland, he says – about €1,000 to €1,200 per month – but New Orleans was certainly more family friendly with average rents coming in at just €700, while NY and Washington are like home.

Though it has crossed their minds, Burns and his wife are nowhere near to coming home. “We have worked very hard to get to where we are and there’s still some work to be done here in Nashville. It’s the epicentre of what we’re trying to do.”

He says the Irish community is strong and kind across the US, particularly in strongholds like Washington DC, Boston, New York and Chicago. “I really enjoy playing in those cities and meeting Irish people. Obviously having a green card has been a golden ticket to America but, for anyone who is planning on coming out and set up some connections with Irish people, I’ve found Irish contacts to be golden.”