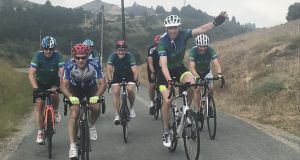 Business on wheels: Dublin Chamber of Commerce members out for charity spin

Thirty-five members of business group Dublin Chamber of Commerce will embark on a 650km cycling trek on Friday, with hopes of raising €20,000 for the Alzheimer’s Society and Peter Ryan, the Paralympic cyclist. The group’s fundraising efforts in the lead up to the event have already raised €10,000.

This will be Dublin Chamber’s fifth charity cycle, with the group set to cycle through Croatia, Slovenia and Italy. The charity cycle event started in 2014 and over the past five years the group has raised more than €170,000 for various charities.

Last year money was raised for Dublin Simon as the members cycled from Biarritz to Narbonne in France.

Participants this year include Dublin chamber past presidents, Greg Clarke of Digicom, Brendan Foster of Grant Thornton, and Liam Kavanagh of The Irish Times. Also taking part are Dublin chamber council members Declan Gray from Evolve, Muirne Laffan from Laffan Labs and Mary McKenna of Tour America. Donations can be made at idonate.ie