Love in the workplace is an endangered affair

Online dating is now the norm, but getting to know a partner at work has advantages 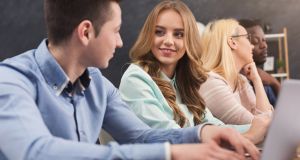 There is surely no better way to meet than at work, not least because the candidates are actually physically present for most of your waking hours. Photograph: Getty Images/iStockphoto

There are many benefits to living near to a world-class teaching hospital – the time the paediatric team at St Mary’s saved my 17-month-old daughter’s life certainly springs to mind.

Since then, my affection for National Health Service staff has been increased by eavesdropping. My journey to work goes through Paddington, allowing me to overhear the St Mary’s trainee and junior doctors discussing their love life.

I’m not planning to make my fortune writing a medical Mills & Boon any time soon, so here is what I have been able to glean from behind my FT: the training placements seem to dictate dating opportunities, and there is a fair bit of vetting by the peer group as these young people weigh up the suitability of potential partners they work and study alongside.

Because it’s a seven-year course, cursed with long hours and blessed with intense, life-and-death situations to face together, this medical mating ritual seems as sensible – and inevitable – as it always did. But the billing and cooing on the Bakerloo line bucks the trend.

Researchers have mapped the extraordinary rise of internet dating and its effects on other ways of meeting romantic partners – all have declined, including via family, school or work, as the lonely flock online in search of perfect strangers.

Michael Rosenfeld of Stanford University found, in a study a few years ago, that the internet provided a significant boost to the love lives of those who had “thin” opportunities – his term not for sizeist preferences but for a paucity of available partners offline – including gay people and older singletons. Meanwhile, the percentage of those who met “through or as co-workers” was being “crowded out” by the efficient sorting algorithms on dating sites.

So much for the office romance, then? I have my doubts, and for two reasons. Which, if I’m wrong, can also serve as arguments in a campaign to revive the tradition. (We are talking here about looking for a partner, by the way, not the dismal behaviour of #MeToo gropers.)

First, there is surely no better way to meet than at work, not least because the candidates are actually physically present for most of your waking hours. Research shows that we value proximity in our choice of mate. According to Viren Swami, a social psychology professor at Anglia Ruskin University, as many as half of us end up with someone who lives within a 6km radius.

Aside from this slightly-uninspiring thirst for convenience, there are other pluses to falling for someone at work. You are likely to be exposed to their best and worst traits and they to yours. Maybe you had to negotiate and establish reciprocity – this comes in handy later. You have shared experience and presumably similar things make you tick.

Eyes locking above surgical masks is a feature of hospital love stories (think Grey’s Anatomy’s Meredith and Derek) but we all have equivalents – Dawn and Tim in The Office bonded while colluding against an appalling boss. And these relationships have a good chance of surviving. Taking our young doctors’ training years as a promising field of opportunities to find love at work, the assumption has recently been debunked that medical marriages are doomed because of long hours and high pressure – that should cheer anyone in a demanding environment.

The other reason for believing the end of office amours may not be nigh is guile, and of two sorts. Almost every couple I know who got together either as colleagues or as contacts, kept it secret for a long time.

Not only does subterfuge give a relationship time to simmer, free of deadly interference from friends and family, it is also (some even admit this) quite fun – until it isn’t, by which time you have probably worked out if he or she is a keeper.

At this moment, there are hearts thumping under the radar in offices and factories across the world. But because it is seen as respectable these days to look online – normal even, to use a plodding concept about something as magical as love – there may be more of us keeping schtum, even lying to researchers about where we conduct our courtships.

It is an unfashionable idea that remains true: someone you spend every day toiling alongside might just be The One, even if you have to travel to the cloud and back to find them.