Eccles Hotel and Spa occupancy at 40% for August, with hope of getting ‘close to 70%’ 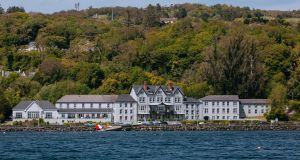 The Eccles Hotel & Spa in Glengariff, west Cork. Owner Ray Byrne says it is already 45 per cent full for July, as it prepares to reopen on June 29th.

The owner of the Eccles Hotel and Spa in west Cork says it is already 45 per cent full for July and at 40 per cent average occupancy for August as it puts the final touches to plans to reopen on June 29th, following its Covid-19 lockdown.

Sales will be driven by the domestic market, with Mr Byrne not expecting to see many foreign tourists this year. “This year the focus will on our home market and leisure business,” he said.

Mr Byrne, who also owns the Wineport Lodge hotel in Athlone with his wife, Jane English, and has the management contract for Staunton’s on the Green in Dublin, said rates are holding up, with the hotel netting on average about €110 per room, excluding VAT and the cost of breakfast.

But the financial impact of Covid-19 is stark, with Mr Byrne forecasting revenues of €2 million this year compared with €3 million last year.

The 55-bedroom hotel in Glengariff secured four-star status from Fáilte Ireland during the lockdown, having undergone a €1 million refurbishment last year to upgrade its facilities.

“Between Zoom and email, we managed to show Fáilte Ireland that we had done the work necessary to get four-star status. It wasn’t ideal timing for us but everyone is going through the same thing.”

In terms of the customer experience, Mr Byrne has decided against staff wearing face masks, except where they are working in close proximity to each other. He said guests would be taken straight to their rooms on arrival, with no form filling required.

While the hotel does not offer minibars, it does provide a fridge with fresh milk for guests who want to make tea and coffee in their rooms.

Mr Byrne plans to open the hotel’s spa but said it won’t host any weddings until 2021 due to social distancing restrictions. It normally hosts about 25 weddings a year.

“You can’t expect people to dance two metres apart from each other. The majority of couples have been happy to move their dates to next year.”

Massages will be available but treatments will be limited to 30 minutes apiece. “With proper PPE, with visors for therapists, limiting the time and proper sanitisation, we believe there are no issues around offering treatments,” he said.

Guests will also have to book slots to use one of its two hot tubs, which look out on to Glengariff Bay. “It will be one party at a time.”

“It’s an old building and one of the benefits of that is that we’ve a massive ballroom, a big lobby, a large restaurant and lots of nooks and crannies. There’s no shortage of space if you want to keep yourself away from other people.”

In terms of what supports the Government might provide to the industry to help it recover, Mr Byrne would like to see a reduction in VAT and financial support for a campaign to market Ireland abroad to tourists. “It’s all about encouraging people to travel again.”

The Eccles claims to be the oldest purpose-built hotel in the State, dating back 275 years. Queen Victoria stayed there in 1861 when she was visiting nearby Garnish Island, and it was leased to the British war office between 1918 and 1920 for injured soldiers returning from the first World War.