‘If people are too ill to provide details, we find out who they are and who needs to be contacted’ 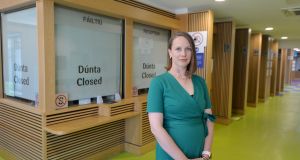 At the start of March hundreds of staff in the Passport Office were gearing themselves up for another busy season processing applications from tens of thousands of Irish people keen to travel off the island when – overnight – everything was turned on its head.

Panicked Irish citizens suddenly desperate to return home from overseas before the world went into an unprecedented lockdown started making frantic calls to the office on Dublin’s Mount Street while applications from holiday makers just stopped.

Within days the entire operation was reconfigured. Some staff were diverted to work with the Department of Social Protection to provide information to the public on emergency welfare payments; others switched focus towards the provision of emergency passports and getting people home; while dozens were reassigned to complex contact tracing and charged with finding the connections of people too sick with Covid-19 to provide much by way of detail of their next of kin.

“There has been a huge reduction in the number of passports being processed so we are supporting other aspects of government,” says director of the Irish Passport Office, Fiona Penollar.

“The way we have adapted has made me very proud, we have jumped from passport processing to something completely different and everyone did that without question or complaint because they knew it was for the greater good,” Penollar says.

She suggests that some elements of the jobs done now are “very different” while in other respects they are similar to what was done before. She cites the example of complex contact tracing: “We have had the experience of following threads,” she says. “Sometimes when we are processing a passport application, we have to work out a story and link people to somebody whose grandmother may have been born in Ireland at the turn of the 20th century. Today some of the cases come to us if people have been too ill to provide details of next of kin and we use our skills to try to find out who they are and who needs to be contacted next.”

She says that when it came to dealing with social welfare queries, the skills passport office staff have in managing people with elevated stress levels has helped. “Sometimes what you need to do is calm somebody down so they can hear what you’re saying and understand it.”

And, in terms of providing consular assistance, in the early stages of the crisis it was all about repatriation with passport office staff working 18 hours a day, seven days a week. However, in more recent times, the focus has shifted towards the welfare of Irish people overseas; people who have lost their jobs or can’t pay the rent and need to find out where the supports are; or those who are in a foreign country and need medical intervention and don’t know how to contact a doctor.

“For people on the front line it can be very stressful and this sounds twee but knowing you are doing something that is helping other people really makes a difference. We know we don’t go into the civil service for favour or for fortune but you know getting a child out of this country so she can have cancer treatment in a European country during this crisis, well, that’s something to be proud of and that’s something that will change somebody’s life.”

Catherine Bannon looks after the Covid crisis line in the passport office and, in the early stages, her team was dealing with about 1,000 queries. It handles about 200 a day now.

“In the beginning most calls were from overseas from citizens who needed to come home before borders shut,” Bannon says. “We had to work out ways to get them back. There is also medical emergencies and deaths and while they are always a challenge, they are much more because of the restricted travel so finding people a route home became quite complex.”

The calls now are from people wondering when they can travel for work “and then there are people who are calling us to see if they will be able to go on holidays in Lanzarote during the summer; we call those the crystal ball calls”.

Siobhán Byrne is responsible for managing the emergency passports with the most important category those who need a passport for medical treatment in another country and those who have suffered a bereavement and need to travel.

There have also been “lots of newborns born overseas to Irish parents and sometimes they’re living in countries that require them to have a passport; we have seen about 20 of those. Who knew so many Irish births were happening around the world?”

Her team also pulled out all the stops to get an emergency passport to a pilot flying PPE equipment back from China. “He only had three months left on his passport and the Chinese authorities require that there is it least six months left on the passport before they will allow a person to travel,” she says. “There has to be a very genuine reason and if there is we will bend over backwards to help people in those situations.”