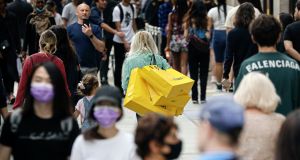 Shops and businesses around London are slowly beginning to reopen but months in lockdown has changed the environment. Photograph: Matt Dunham/AP Photo

It was not so much a garden as a small, walled patio but as three of us sat around a large table eating fish and chips, we knew we were within either the spirit or the letter of the lockdown law, even if we were not sure which. My friend Johnny had chosen the menu earlier that day when he saw that his local fish and chip shop had reopened and he was eager to give them whatever business he could.

It’s a story repeated all over London and one friend after another this week has talked up the merits of their favourite burrito stand or sandwich shop just back in business but with no customers. With most office workers still working from home, the entire economy that provides them with lunches, transport, dry cleaning and other services is struggling to come back to life.

But Johnny’s concern for his local businesses reflects something else that has changed in London during the lockdown as the traditional reserve that governs relations with neighbours has crumbled. James, who was also at the fish and chip supper, said he had spent 12 years avoiding anything more than breezy cordiality with the other residents of his flat block.

He was particularly keen not to get too close to the woman who lived directly below him, who seemed to be quite sociable and fond of a drink like himself. He was afraid that if he started talking to her, they might decide to have a drink together in one of their flats and soon it could become a routine that would be hard to put a stop to. And what would he do then?

A serious pyrophobe who will rush home from anywhere if he thinks he left the radio plugged in, James also believed that his neighbour smoked in bed and would one day burn the house down.

It started with the weekly 8pm clap for the NHS, when they found themselves on the street outside waiting for the din to begin and she told him she had found a Waitrose that was always empty and had everything that was in short supply, from eggs to toilet roll.

When the lockdown rules eased, James and his neighbour started to go for socially distanced walks in Regent’s Park, slurping very strong gin and tonics from runners’ water bottles. They now have a weekly date in a garden space they have commandeered and James says he regards her as a friend.

In my building, we traditionally avoid anything beyond the shortest greeting apart from at a drinks party in the lobby once a year which only a handful of us go to.

During the lockdown, I would check with the hall porter every day on the health of some of the older neighbours, particularly a funny, clever couple in their late 80s, both of whom had to go into hospital before Christmas. One sunny day when I asked after the couple, he waved towards the bleak, concrete courtyard outside.

“They’re out there drinking a bottle of rosé,” he said.

And there they were, she in a yellow cotton frock and he in pink shorts and a blue and white striped shirt, each of them with a glass of wine and a book in front of them. Other neighbours were scattered around the usually deserted courtyard, some on their laptops, others apparently doing nothing at all.

As the lockdown has eased, the lobby has become the communal space its architects probably intended and everyone is talking to one another in a way we never have before. For some, it’s probably the loneliness of working from home alone with none of the casual daily interactions of office life that have pushed them across the Rubicon of getting to know their neighbours.

But something else is happening too. A psychiatrist told a friend of mine that coronavirus has “torn the skin off the world”, leaving us more vulnerable than before to our feelings and fears. And in London, many people’s greatest fear is that the economy will not recover and that they or many of the people they see every day will soon be in deep trouble.

Before Johnny went to the fish and chip shop the other day, he met the builders who have made his life hell for the past few years, drilling from 6am until late in the evening. His campaign against them, which included hectoring the contractor over the phone late at night, got so far out of control that the police spoke to him about it.

When he asked them if they’d like him to move his car out of their way, they told him how sorry they were for all the nuisance they caused.

“Please make as much noise as you have to for as long as you can. I’m just happy that you all have a job.”