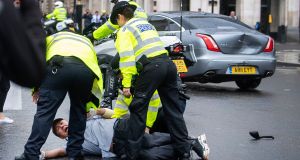 Police detain a man after he ran in front of UK prime minister Boris Johnson’s car. He had been demonstrating about Turkey’s operation against Kurdish rebels in northern Iraq. Photograph: Victoria Jones

Conservatives have accused teachers’ unions of slowing down Britain’s economic recovery by frightening parents away from sending children back to school.

Earlier this month, the government abandoned a plan to bring all children back to classes before the summer holidays, although schools are open for children at some levels.

Culture secretary Oliver Dowden used a press conference in Downing Street to accuse Labour of working with the unions to frighten parents about the risks from coronavirus.

“I do think it is important though as part of this that we really reassure parents that it is safe for their kids to go back. I have been really heartened by the incredible hard work that I have seen from teachers up and down the country, who have worked so hard in difficult circumstances to get kids back to school,” he said.

“I do think it is a bit of a shame that their unions and indeed it appears the leader of the Labour Party is not also providing them with that kind of backing and support.”

At prime minister’s questions in the House of Commons, Boris Johnson repeatedly challenged Labour leader Keir Starmer to say that he believed it was safe to send children back to school. Sir Keir declined to do so, although his spokesman said later that the Labour leader had always said he wanted schools to reopen as soon as possible and had offered to work with the prime minister on the issue.

“Ultimately it was Gavin Williamson who said on June 9th we’re not able to welcome all primary children back for a full month before the summer,” the spokesman said, referring to the education secretary.

Conservative MPs on the Commons education committee accused Britain’s biggest teaching union of running a political campaign to prevent schools from reopening. But Mary Bousted, joint general secretary of the National Education Union (NEU), said the union favoured a reopening of education but only under certain conditions.

They include a reduction in the number of coronavirus cases, a national plan for social distancing, regular testing for children and teaching, and protection for the most vulnerable.

“The problem we have in England in particular is that we have some of the highest pupil-teacher ratios,” she said.

“We’ve got more pupils in classes and the footprint on the classes is smaller so if you’re going to continue with social distancing, it puts the pressure on the school site to be very great.”

As Premier League football returned on Wednesday night, Mr Dowden said challenges facing theatres and cinemas still had to be resolved and he has asked experts to come up with ideas to pave the way for the return of live performances.

“We do need greater flexibility to overcome some of the very specific and practical obstacles to the return of live performance. So that’s why over the next week we will be convening experts in a targeted way, bringing together our leading performers in theatres, choirs and orchestras with medical experts and advisers,” he said.