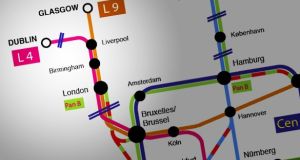 As European leaders haggle over the €500 billion pandemic stimulus package, and millions of Europeans face the reality of summer staycations, Austrian artist Stefan Frankenberger has developed a fantasy travel network to help spend the money.

Metropa is his own personal European supermetro network, which links the continent’s major cities by rail with a mix of existing and new connections to generate a real sense of European unity in people’s minds.

His Metropa map – available on merchandise from metropa.eu – has already delighted public transport geeks and graphic nerds. Now the Austrian artist hopes the pandemic will nudge ordinary European citizens to demand action from their politicians.

“When people see something concrete in front of them it penetrates into the subconscious,” he said. “Metropa reminds us of underground maps we all know, it draws on the known, to produce a new reality that could be.”

Frankenberger says his ideal Metropa would be a new high-speed magnetic levitation rail network, built and operated by restructured crisis-hit aviation operators. But he prefers to skip over engineering realities to instead offer travel-starved Europeans a cheap and cheerful idealised rail trip.

Dubliners can hop on Metropa’s purple 4 line, whisking them across the Irish Sea, through Liverpool and London to Brussels, Cologne and Frankfurt. Each of those cities offer transfers to other lines, while passengers still on board the 4 to Stuttgart can decide whether to change to the 5 line through Zürich and Milan to Rome – or remain seated for Munich, Salzburg and Vienna.

With end stations as far south as Marrakesh and as far east as Tel Aviv-Jaffa, Frankenberger says the network frames the EU not as a legal union of sovereign states, defined through open and closed borders. Instead the Europe of Metropa is a cultural space that needs to exist more prominently in people’s minds and hearts.

Though a fantasy, Frankenberger is convinced Metropa ticks all the boxes for the ideal EU post-corona plan: it uses state economic stimulus to expand and invest in the existing rail network, providing a knock-on stimulus from extra passengers and freight capacity, while meeting other needs for greater EU ecological responsibility and European integration.

Pushing to realise Metropa, he says, is particularly urgent for EU member states like Ireland.

“As an island, Ireland is far in the west and, after Brexit, even more on the EU periphery,” said Frankenberger. “But when cities build infrastructure they always start on the periphery and fill in the space in between so the city can grow better.”

Can we make Europe’s rail network as integrated and easy to use as a city metro? “I believe we should,” he said. Despite a general lack of co-operation between European operators, fragmented booking services and a limited sleeper network, he said: “This map gives us something to aim for.”