The Irish Times view on face masks: The message has not cut through

Most people should be wearing them. Even if the effect is marginal, it could be the difference between an epidemic that is growing and one that continues to retreat 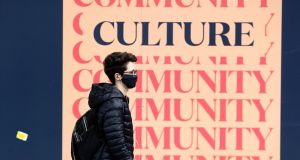 We’re more than three months into the pandemic, a deadly virus is still circulating in the community and the spectre of a second wave of infections hangs over us. Yet one simple, cheap and – the evidence increasingly suggests – effective tool in the fight against the coronavirus continues to be shunned by a majority of people.

Some scientists worry about the effectiveness of face coverings and fret that people who use them incorrectly could increase their risk of contracting the disease. But a growing body of evidence points to significant reductions in transmission where a critical mass of people wear a mask. One recent study examined the experience in the city of Jena in Germany, where from April 6th it was compulsory to wear masks in public places, such as on public transport and while shopping.

After the introduction of the mandatory masks, “the number of new infections fell almost to zero”, noted the report published by an independent research body, the Institute of Labor Economics (IZA). The authors believe the reduction in the growth rate of infections was 40-60 per cent.

A separate study by scientists at Cambridge and Greenwich universities found that if more than 50 per cent of people wore them, those who were infected with Covid-19 passed it on to only one person or less. Masks are particularly useful in stopping the wearer from passing on the virus, and given that scientists believe the virus can be transmitted in the asymptomatic or pre-symptomatic stage, that means everyone should be wearing them, at least in enclosed spaces where physical distancing is difficult.

The Government, reflecting a delay in WHO guidance on the issue, was slow to advise the public to wear face coverings. It was not until early May, more than six weeks after the lockdown began, that the National Public Health Emergency Team issued guidance on wearing masks. There had initially been concern that a more general recommendation would exhaust the State’s supply, but successful procurement efforts by the HSE and growing awareness that home-made coverings could play a vital role eased those concerns.

Yet the Government’s communication has remained confusing. It advises people to wear masks in shops and on public transport, but senior officials continue to muse openly about the lack of conclusive evidence of their effectiveness and ministers have not moved to make them mandatory. Little wonder that the message has not cut through. Some people, including children, those with breathing difficulties or some with disabilities cannot wear masks, and there should be tolerance and understanding of that fact. But most people should be wearing them. Even if the effect is marginal, it could be the difference between an epidemic that is growing and one that continues to retreat.