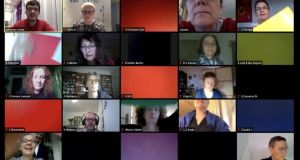 Some of the members of the Berlin Passionskirche (Church of the Passion) choir rehearse Isolation ahead of a live online performance on Wednesday.

As Ireland eases back to normality, Irish poet Gerard Smyth’s lockdown poem Isolation this evening leaps from the pages of the Irish Times to a worldwide stage on YouTube.

Two months after being published by the newspaper, the poem has been set to music by British composer Philip Lawton for a Berlin choir in isolation.

“I’m very honoured and puzzled at how it’s going to work,” said Smyth, who is Poetry Editor of The Irish Times.

He wrote the poem “as a piece of self-consolation” and, he said, gained a huge following after publication, when it was read on the radio and posted online.

Philip Lawton, a Berlin-based composer, was recommended the poem after receiving a commission from Berlin’s Passionskirche (Church of the Passion) choir for a new piece. He said Smyth’s poem caught his eye from the first line: “Bunched together like a gathering tribe...”

“This is about being together, even though we’re separated,” said Lawton. “It’s a hopeful poem about what is going to happen and the enjoyment we can have later.”

The composer has turned the technical limitations of online collaborative performance — in particular signal lag — into creativity. Much of his vocal work to date has not been about tight, synchronised melody lines but creating clouds of sound.

“The spread, cluster and chords will create nice effects when sung at different times,” he said.

During the performance, conducted by Johannes Stolte, singers will post messages to distant loved ones in the chat window, interspersed with lines from German poet Heinrich Heine’s Ein Fichtenbaum steht Einsam (A Pine Stands Lonely).

As well as composing new music, Lawton is a choral conductor and choir master and has arranged instrumental and vocal music for the Deutsche Oper Berlin and Munich’s Bayerische Staatsoper. Ahead of the performance Lawton admitted he was nervous. Unlike other Zoom performances, where individual musicians are knitted together digitally, “Isolation” is completely live — with no safety net.

“If people come to it with a conservative mindset of how choir music should sound, they may be surprised or disappointed,” he said. “But I hope people will see it as an exciting use of technology available to us at the moment.”

Web: “Isolation” will premiere today at 7.30pm at https://www.youtube.com/watch?v=ethunq6oAA8&feature=youtu.beIt will have a second performance on June 24th also at 7.30pm.