Queen’s pub in Dalkey closing down 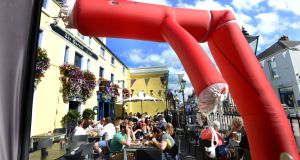 Beer garden of the Queen’s in Dalkey: Its car park makes it an attractive development site. Photograph: Cyril Byrne

Former AIB chief executive and one-time Aer Lingus chairman Tom Mulcahy is permanently closing the landmark Queen’s pub in Dalkey and is believed to be preparing the asset to be put up for sale.

All staff at the south Dublin pub received a letter on Friday morning from Mr Mulcahy to tell them the pub “will not reopen and has ceased trading” and that they will be made redundant on statutory terms. The staff had been laid off since March 16th as a result of the coronavirus pandemic.

The pub is majority-controlled by Mr Mulcahy and his family, with a minority stake held by his business partner, Gerry O’Farrell, who is also involved in the Smokin’ Bones restaurants in Dublin. The owners paid an estimated €7 million for the Queen’s in 2003.

“We have had 17 wonderful years of engagement with The Queens. It leaves us with a huge sense of loss on the closure. The Covid cocooning gave us time for reflection. We realised that our time for retirement had arrived,” said Mr Mulcahy, speaking on behalf of himself and his wife, June.

It is understood that the pub, which has a sizeable car park to its rear, will be sold. The decision to close it ahead of the sale suggests the pub may be marketed as a development site, as the market value of a trading pub falls substantially the moment it is shuttered.

Sources within the trade suggested a sale has been under consideration since last year. The Queen’s is rumoured to be coming to the market for a price in the region of €3.5 million.

Its car park would make it an attractive development site in the heart of Dalkey. However, any building work would be complicated by the fact that the pub is listed on the Record of Protected Structures by Dún Laoghaire-Rathdown County Council.

According to its most recent financial statements, the large bar and restaurant employed 36 staff on the premises in the historic centre of Dalkey, one of the most expensive districts in the country for property.

The pub had accumulated profits of €1.32 million by the end of last August, after recording a pretax surplus of €127,000 over the previous 12 months.

The pub is valued at about €6.9 million on the books. Mr Mulcahy is listed as being owed €4.5 million by the company that owns the pub, The Queens Inns Ltd. AIB is owed €1.1 million and holds a charge over the pub.

Mr Mulcahy stepped down as chief executive of AIB in the summer of 2001 after seven years in charge. The following year he succeeded the late Bernie Cahill as chairman of Aer Lingus, before stepping down in 2004.