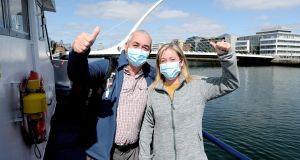 Des Mulreany from Finglas and Lisa Leddy from Ballyfermot, on Monday ahead of the first domestic passenger sailing since the outbreak of Covid-19.

In addition to the reopening of the retail industry, Monday also witnessed the first stirrings of the city’s locked-down tourist industry. Dublin Bay Cruises, which operates tours on the water up and down the city’s coast, has recommenced operations with a 60 per cent capacity reduction.

The company’s 100-capacity touring vessel set sail from Sir John Rogerson’s Quay in the city on Monday, although its capacity is restricted for now to 40 people per trip. The cruises, which incorporate visits to the coast near Dún Laoghaire, Howth and Ireland’s Eye, will operate seven times daily and must be booked online in advance.

State tourism officials, including Tourism Ireland chief executive Niall Gibbons, were present for the launch of its services on Monday.

“It will take a little time to build up, but there’s already a lot of interest. People have been in shut-down for so long that they are yearning for the great outdoors,” said Eugene Garrihy, managing director of Dublin Bay Cruises.

The company said it is also giving away 10 seats free each day to medical frontline workers, who must ring the company directly.