Belfast bartenders mixing it with the best in Big Apple 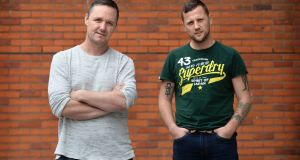 While there is a renewed vibrancy to some urban parts of Ireland’s pub industry, it can be abroad that the Irish make their biggest mark in this sector.

Seven years ago, Belfast cocktail bar manager Sean Muldoon packed his suitcase and left for New York with nothing but the word of one of his bar customers who said he would help him to open an establishment in the Big Apple.

Soon afterwards, his friend Jack McGarry, whom he had managed at the iconic cocktail bar at Belfast’s Merchant hotel, joined him in New York following a stint in London.

It took more than two years of planning, poverty and heartache, but together, in 2013, they opened what was has become renowned as perhaps the best bar in the world: the Dead Rabbit in downtown Manhattan, which has been creaking under the weight of its industry awards in recent years. McGarry, who had been Muldoon’s bartending protege at the Merchant, has also won several awards, including International Bartender of the Year 2013.

Their venture almost never happened, however, due to some initial struggles.

“Before it opened, we were broke, we were desperate. I was starting to wonder was this thing ever going to happen,” says Muldoon, who left for New York when he was 40.

“I don’t know how much longer I would have lasted [if it hadn’t opened when it did].”

From a standing start, Muldoon and McGarry, who has yet to turn 30, have in just a few years built a growing US bar business that has a turnover of $12 million and 80 staff. The Belfast double act has well and truly made it in the city that never sleeps.

They are now planning to open a third outlet in the city and are fielding offers to open new bars from London to Miami.

This week, they were in Dublin to tell their story to the city’s publicans as guest speakers at the annual conference of the Licensed Vintners Association (LVA) in the Westbury hotel. The event was attended by up to 200 of the city’s pub owners and themed “Your pub’s future”.

For five days either side of last weekend, the Dead Rabbit also operated a pop-up bar at the Westbury’s Sidecar bar. They previously ran a pop-up at Claridge’s in London. As in the traditional retail sector, there is growing trend for the best-known bars globally to open pop-ups for marketing purposes.

“Pop-ups bring awareness for your bar,” says Muldoon. “It’s for branding. You only get asked to do this when you’re at a high level. The host of the pop-up typically pays all the flights, accommodation, bartenders fees, and they put on the whole set-up.”

Their road to the elite level of the bar industry is a mini rags-to-riches tale.

Their first success was homegrown. Both men are steeped in bartending cocktail culture, and while they were at the Merchant, it won a clutch of international awards, including world’s best cocktail bar. Muldoon was McGarry’s mentor there.

One of their regular customers in Belfast was a Galway native and an executive with the New York Stock Exchange, Conor Allen. At the time, Allen spent five weeks out of six in new York, but every month and a half or so, he spent a week in Belfast, and stayed near the Merchant.

He struck up a rapport with the two bartenders, and told them that if they could come up with a unique idea, he would help them open up their own place in a major city abroad such as New York.

“He said he would make the visas happen, he said he’d help find us backing. I knew he had money and I knew he was a man of his word. I could just sense that something was going to happen,” said Muldoon.

Although he had a wife, a house and two stepdaughters at home in Belfast, Muldoon left for New York to chase his dream of owning a bar in the city. McGarry, still in his early 20s, initially went to London to work in Milk & Honey, a renowned SoHo cocktail club.

Muldoon’s big idea was to open a bar that fused the cocktail culture of the Merchant with the everyman bonhomie of Belfast pub the Duke of York, where they drank off-shift.

“We knew some people could feel intimidated by atmosphere at the Merchant, which was all table service. The Duke was a whiskey bar, but it also served beer and there was no airs or graces. We wanted to bring those things together.”

But, as he soon found out, the New York bar scene doesn’t just throw open its doors to conquerors from abroad, and he initially had difficulty finding the right backers, opportunity and premises.

McGarry soon followed him over to New York, and they doubled down on Muldoon’s drive to get a project off the ground, while working whatever jobs they could get.

“We already knew what being the world’s best looked like,” says McGarry. “We knew the importance of details, so we knew we could do it if we could find the right partners. And there was no way we were going home with our tail between our legs.”

Allen eventually put them in touch with well-known Irish-American publican Danny McDonald, whose establishments included Puck Fair on Lafayette Street. McDonald himself didn’t invest, but he connected them with some of his own business partners, who happened to have a suitable premises near the financial district.

“Conor raised half the capital,” said McGarry. “But he wanted to bring in people who really knew the New York pub industry, too. When we saw the building that the other investors had, everything made perfect sense.”

The bar has three rooms: a pub, cocktail room and an overflow room. The Dead Rabbit gang theme gave them a compelling narrative around which to drive their branding. The discerning New York cocktail bar scene lapped it up and it was a roaring success. The awards followed.

An opportunity arose to take over another underperforming bar owned by some of the same investors, near Battery Park, also in downtown. They developed a fresh concept around a Cuban prohibition-era bar, and opened BlackTail last August.

“We didn’t want to be pigeon-holed, we wanted to do something outside of an Irish bar, outside our comfort zone,” says McGarry.

It has started well, although McGarry says he was planning to tell the LVA audience that it had been harder for them to engage a Cuban audience on social media, which they had used to drive branding efforts around Dead Rabbit.

The duo are now about to open an outside space at BlackTail, which McGarry says is “crucial for profitability”. They are also looking at extending the Dead Rabbit and opening their third venue.

“We will have well over 100 staff by the end of next year,” McGarry says.

The Irish pub industry is steeped in lore and heritage – the LVA, which represents about 700 Dublin pubs, celebrated its bicentenary in 2017 – but the concept of an Irish pub can often seem jaded abroad, especially in the US. McGarry says they aimed to “bring it into the 21st century”.

“We are creating our own heritage with the Dead Rabbit,” he says.

They currently have no plans to open a pub on their home island, but never say never.

Muldoon says he admires iconic Dublin pubs such as the Long Hall.

He is also amazed that it is still possible for some pubs in the capital to get by without having to serve food, which can be far less profitable than drink. However, the pendulum is swinging towards food service in Dublin, the LVA has said.

“In New York, to not serve food in your bar would be unheard of,” says Muldoon. “But believe me, if I could get away with not doing it, I would.”

An eye on the future, but clearly a traditionalist at heart.

1 NI house builder apologises to Harry and Meghan over adverts
2 Volvo warns of scaled back car line-up if UK splits from EU rules
3 Little strategic thinking in election manifestos of Fine Gael and Fianna Fáil
4 US threatens retaliation against EU over proposed carbon tax
5 Who are Ireland’s 17 billionaires?
6 Are there annual limits on inheritances or gifts to a child?
7 South Dublin Credit Union members urged to borrow more to ensure survival
8 My father in a nursing home wants to gift me his house
9 CPL founders Anne Heraty and Paul Carroll in line for €1m dividend payout
10 Opioid executive admits to ‘no morals’ ahead of prison term
Real news has value SUBSCRIBE