Caveat: If the State builds tourism attractions, people will come

For an industry employing 250,000, tourism capital funding is a borderline insult 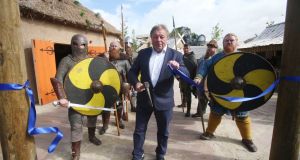 Tayto Park founder Raymond Coyle launching the Viking Voyage water ride. The Co Meath theme park has been a big hit since opening in 2010, emphasising that if you build attractions visitors will come. Photograph: Photocall Ireland

With the budget just four days away, the tourism industry is collectively camped beneath a picture of the Sacred Heart praying that its 9 per cent VAT rate survives. In reality, that should be a sideshow.

A far bigger issue for the future development of the industry is the chronic under-investment in new tourism attractions, especially in areas of the State that are not currently tourism hotspots and where returns are not immediately guaranteed.

The Government’s capital plan has an allocation of just €106 million for tourism projects between 2016 and 2021. For an industry employing in the region of 250,000 people, that’s a borderline insult – like tipping a good waiter 50 cent.

Not every tourism capital investment will pay off for the State in the bountiful manner of the Wild Atlantic Way, where they are now beating back summer visitors with the proverbial soiled sticks. Meanwhile, Dublin is Dublin – it and the east coast will always have an edge due to superior infrastructure and access points for tourists.

But what about those regions in the centre of the country and along the Border who need the jobs? From a tourism perspective Ireland is a ring doughnut: an abundance of sticky sweet stuff around the edges, with a big gap in the middle.

To drain some of the excess away from the bulging hotspots to the east, west and southwest the State needs to step up with more capital funding for new attractions that, in time, will help to foster a sustainable industry near the Border and in the midlands.

There is no way to skirt around this challenge, nor will there be an easy payback on this spending today or tomorrow. But that is the thing about capital investment: it is supposed to made with an eye on the long term.

Fáilte Ireland, the State authority with responsibility for developing the national tourism product, appears to be doing what it can with what it is given. So why not give it more?

In 2008 its State allocation was €98 million. In 2017 – as the tourism industry is booming and has proven and re-proven its potential to generate jobs in parts of the country that the IDA can’t reach – Fáilte Ireland got just €67 million. On what planet does that make sense?

Paschal Donohoe, the Minister for Finance, should on Tuesday rectify it and the similar mutilation of Tourism Ireland’s budget. Then he should dig deep to find as much as he can of the €60 million required annually over the next decade that the industry has called for to fund new attractions.

If that means making policy adjustments around the VAT rate and ring-fencing some of the cash raised for future investment, so be it. Booming Dublin hotels don’t need a special 9 per cent VAT rate. Google and Facebook and other multinationals’ corporate canteens don’t need a 9 per cent tourism VAT rate. It’s a waste of a subsidy. Find a way.

Ah. I can already hear the chorus of Dublin voices singing the same old tune: that it would be even more wasteful to hit them, proven performers, to fund tourism investment elsewhere in areas that won’t hit the same heights or give the same returns.

Look at Longford and Center Parcs in Ballymahon. This week the UK adventure holiday village operator selected Sisk as its builder for the 500 lodges that will form part of the development, which opens in 2019 and will provide 1,000 jobs.

Center Parcs is investing €233 million in Ballymahon, which is a nice village but from a tourism standpoint Barcelona it ain’t. The investment is already transforming the area, with new restaurants and other small businesses popping up on the back of it.

If a private sector operator like Center Parcs can justify such a large commercial investment in an area of the country that has long been ignored by policymakers why can’t the State find other similar-scale opportunities?

Lough Key Forest Park in Roscommon was just an unloved swathe of trees and water until the local council approached Coillte with the idea to jointly develop a tourism initiative. A decade after it opened it now attracts more than 200,000 visitors a year.

This week Fáilte Ireland tendered for a design for the new tourism brand planned for the midlands, welcome progress as it seeks to join a stable that already includes the Wild Atlantic Way, Ireland’s Ancient East and Dublin’s Breath of Fresh Air brands.

It also announced the 24 projects that have been selected for the next stage of assessment for its capital grants scheme for large tourism projects. The scheme is worth €65 million over the period until 2020. It’s just a drop in the ocean, but it is all the funding that is there.

The shortlist includes, for example, an interpretative centre at the medieval Granard Motte in Longford, a heritage hub at the Castle Leslie estate in Monaghan, and a broadcasting museum in Athlone.

Imagine how many more regional projects Fáilte Ireland could fund if Donohoe repaired its budget?

Build it and they will come.

And the gong for the most head-scratching award of the year goes to DatSci, the data science awards, which in recent weeks gave an award to the Garda Síochána analysis service.

Elsewehre in the force , the Garda has been plagued this year by data anomalies and glaring cock-ups in its crime-reporting functions. Think of the infamous “elevation” by 1.5 million of breath-test statistics; or the delays by the CSO in releasing crime figures over fears that some cases of violent crime were misclassified; or the recent misreporting of crime-detection rates. The issue has become an embarrassment for the State.

Bear that in mind as you consider the fact that the force’s analysis service picked up the prize at Croke Park on September 21st for best use of data science in a public sector body, beating off competition from the Central Bank and the Department of Social Protection.

If there was an award for odd timing....

Former rugby star Frankie Sheahan’s Pendulum Summit motivational conference in Dublin is ploughing ahead with its preparations for January, when it brings its chest-thumping, fist-pumping show to Dublin’s Convention Centre.

The prosperous times are definitely back for property developers. This week Ballymore developer Sean Mulryan mail dropped hundreds of copies of its “little black book” containing nothing but high-end photographs of its developments. It’s a nice little publication, expensively put together and very 2006-looking. But there seems little reason for it other than to say “we’re back”.

Aryzta’s revenue trends improved in July but income still down 18% 08:06
Apple’s $250bn Irish dividend, Bank of Ireland’s U-turn, and the cost of divorce 06:30
Stocktake: A record-breaking cheating season 05:50
Transferring the family farm without a tax headache 05:50
Stocktake: Tech stocks have taken over the market 05:40

1 ‘No demand... because there are no people’ at well-known Dublin pub
2 Apple’s $250bn Irish dividend, Bank of Ireland’s U-turn, and the cost of divorce
3 Divorce: What will it cost and can you afford it?
4 Transferring the family farm without a tax headache
5 Apple received $250bn dividend from Irish subsidiary in 2019
6 Nearly 30,000 could lose pandemic payment if they do not confirm eligibility
7 Pmask coverings likely to suit meat plant workers, founder says
8 UK criticised for ‘unforced errors’ on post-Brexit trade deals
9 Buying a second home now that we work from home
10 ‘Humble’ Airbnb going back to basics
Real news has value SUBSCRIBE