Average daily room use in Belfast jumps 14.1% compared to average increase of 4.7% 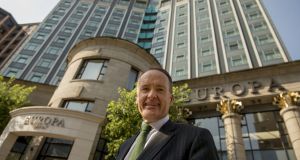 Hotelier Howard Hastings at Belfast’s Europa Hotel: The city boasts some of the top performing hotels in the UK according to a new report. Photograph: Dara Mac Dónaill

Belfast boasts some of the top performing hotels in the UK according to a new report which shows hotels in the city enjoyed the highest annual increase in occupancy rates for the first seven months of this year.

According to PwC’s UK hotels forecast, occupancy rate in Belfast increased by 5.5 percentage points in the seven months to July – three times higher than the average rise across UK hotel.

The latest PwC report states that Belfast is currently in the UK’s top-three major cities as measured by the relative performance of the city’s hotels.

Since the start of the year, Belfast hotels have seen their average daily rate jump by 14.1 per cent – significantly ahead of the UK average increase of 4.7 per cent.

Belfast was also the top performer when it came to growing revenue per available room (RevPAR) – a key industry measure – delivering 20.4 per cent, well ahead of the UK average of 6.1 per cent.

In financial terms, this meant that Belfast was fifth highest after London, Edinburgh, Brighton and York with an average RevPAR of £61.28 per night.

According to PwC Northern Ireland partner Martin Cowie, the latest report shows that the weakness of sterling has been a significant factor in encouraging record numbers of leisure tourists to visit the UK in 2017.

“Belfast continues to be a ‘must-visit’ destination and the steady increase in local performance metrics suggests that this is driving the city further up the performance league”, he said.