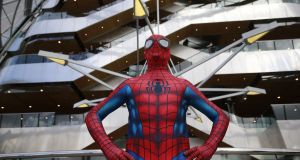 The Convention Centre Dublin’s contribution to the Irish economy rose 16 per cent to €51 million last year, as the number of delegates and visitors attending events in the venue rose, the company’s finance director Killian Carroll said.

The comments came after company behind the centre, Spencer Dock Convention Centre Dublin DAC, reported its operating profit rose almost 11 per cent to €5.59 million during the period. The economic contribution calculations are based on Fáilte Ireland estimates of what conference delegates typically spend, Mr Carroll said.

The biggest events hosted by the centre in 2016 were the Alltech International Craft Brews and Food Fair, which attracted more than 4,000 delegates that January, and Pendulum Summit for business and self-empowerment, which lured 3,100 participants the same month. The World Buiatrics Congress for cattle specialists in July last year brought in more than 3,100 delegates.

“This was a good year for the business which saw us host 157 events,” said the centre’s chief executive, Stephen Meehan. “These were typically larger in size than those in 2015, longer in duration and attracted more delegates and visitors than in previous years. In all there were over 300,000 delegate days creating an economic contribution to Ireland of €51 million.”

The centre, which opened in late 2010, said it has seen a “steady performance” so far in 2017, while advance bookings suggest 2018 will be a “good year”. Events in the calendar for next year include the 10th World Congress of Pain and 32rd International Congress of Occupational Health.

The venue, Ireland’s first purpose-built international conference centre, was developed as a public-private partnership between the Office of Public Works and Spencer Dock Development Company – which was owned by developers Johnny Ronan and Richard Barrett of Treasury Holdings and Harry Crosbie. The building itself is owned by the OPW.

The State-backed Irish Infrastructure Fund moved in 2015 to acquire the remaining 20 years of the licence to run the centre after the rights were put up for sale by liquidators of Spencer Dock Development Company.

The fund was set up in 2012 by Irish Life with a cornerstone investment from the State’s Ireland Strategic Investment Fund. The Irish Infrastructure Fund’s investments are managed by Australian firm AMP Capital.

The OPW pays the company behind the convention centre a monthly amount, known as a unitary charge, to cover the cost of construction over the conference centre. This amounted to €8.75 million for 2016.

Meanwhile, net profit at the company fell to €11 million in 2016 from €16.5 million for the previous year. This was primarily due to an accounting requirement that the company must provide for the cost of moving its fixed-rate loans to variable rates, which fluctuates each year.

Net debt fell to €103 million from €92.5 million year on year, as the company paid down debt on schedule.

The convention centre had 70 employees last year, according to filings for a related company called Spencer Dock Convention Centre Dublin (No 2) DAC, which manages the day-to-day operations of the venue.