US prosecutors’ access to data stored abroad under consideration 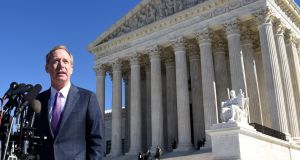 US supreme court justices on Tuesday began deliberations on Microsoft’s dispute with the US justice department over whether prosecutors can force technology companies to hand over data stored overseas, with some signalling support for the government and others urging Congress to pass a law to resolve the issue.

The case began when Microsoft baulked at handing over a criminal suspect’s emails stored in Microsoft computer servers in Dublin in a drug-trafficking case. Microsoft challenged whether a domestic warrant covered data stored abroad.

The Microsoft customer whose emails were sought told the company he was based in Ireland when he signed up for his account.

Ireland and Britain and several other states have filed court papers raising concerns about the US government’s position.

Chief justice John Roberts and Justice Samuel Alito, both conservatives, indicated sympathy during an hour-long argument in the case toward the justice department’s stance that because Microsoft is based in the US it was obligated to turn over data held abroad sought by prosecutors in a US warrant. Liberal justices Ruth Bader Ginsburg and Sonia Sotomayor questioned whether the court needed to act in the closely watched case in light of Congress now considering bipartisan legislation that would resolve the legal issue.

A ruling is due by the end of June, giving Congress little time to act. “Wouldn’t it be wiser to say let’s leave things as they are. If Congress wants to regulate in this ‘Brave New World’, it should do it,” Ginsburg said. Alito agreed that Congress should act but added that “in the interim, something has to be done”.

If the court were to rule in favour of Microsoft and Congress does not amend the 1986 law at issue in the case, Justice Alito wondered how the government could quickly obtain information in a major criminal investigation in which data is held overseas, potentially in several different countries. “What happens in that situation?” Justice Alito asked. Chief justice Roberts appeared concerned that companies like Microsoft could enable customers to evade the reach of US prosecutors by deliberately storing data overseas.

Microsoft “might gain customers if you can assure them, no matter what happens, the government won’t be able to get access to their emails,” chief justice Roberts said. The company’s lawyer, Joshua Rosenkranz, responded that customers already know that other services existed that provided stronger privacy guarantees. “If customers do not want their emails to be seized by the government, they don’t use Microsoft’s services,” Mr Rosenkranz said. The case highlights the friction between tech companies and privacy advocates desiring to protect customer data and law enforcement wanting information vital to criminal and counterterrorism investigations.

The New York-based Second US circuit court of appeals in 2016 sided with Microsoft, handing a victory to tech firms that increasingly offer cloud computing services in which data is stored remotely. President Donald Trump’s administration appealed that ruling to the Supreme Court.

The appeals court said the emails were beyond the reach of domestic search warrants obtained under a federal law called the 1986 Stored Communications Act. Bipartisan legislation has been introduced in Congress to update the 1986 statute, a move backed by both Microsoft and the administration.

The Bill would let US judges issue warrants while giving companies an avenue to object if the request conflicts with foreign law. Passage of the Bill likely would render the case moot.

Senator Orrin Hatch, a Republican who has led the efforts to rework the law, was in the courtroom to hear Tuesday’s argument. He said in a statement afterward that his Bill would resolve the legal question while balancing law enforcement and privacy interests. “This commonsense legislation has the full-throated support of both law enforcement and the tech community and deserves swift enactment,” Mr Hatch added. Globally dominant American tech companies have expressed concern that customers will go elsewhere if they think the US government’s reach extends to data centres all around the world without changes being made to the law.

Microsoft, which has 100 data centres in 40 countries, was the first American company to challenge a domestic search warrant seeking data held outside the US.