Childproofing your smartphone could be child’s play

Weblog: ICare technology works on the principle that children swipe differently to adults 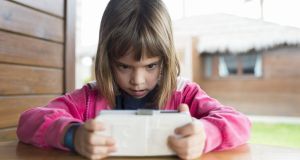 Using its pattern-recognition tech, iCare can detect the difference between an adult or child’s swiping or touchscreen behaviour with up to 97% accuracy. Photograph: iStock

From running up huge bills on the App Store to accessing inappropriate content on YouTube, there are countless horrific scenarios when kids get hold of their parents’ smartphone. And unfortunately, “apps that require explicit actions from parents may not be effective when parents forget to enable them, and the ones that use built-in cameras to detect children may impose privacy violations,” say the researchers behind iCare.

ICare is a technology under development by a team at the University of South Carolina and Zhejiang University in Hangzhou, China. By testing this pattern-recognition tech on 31 people, including 17 schoolchildren, iCare was able to detect the difference between an adult or child’s swiping and touchscreen behaviour with 84 per cent accuracy, rising up to 97 per cent when it learned from eight or more consecutive swipes.

The reasoning behind iCare is that children have distinctively different smartphone interactions: they have smaller hands, which leads to shorter swipes and use of less screen space, and they are less dextrous than adults, resulting in less-precise swipes, taps and slower reaction times.

On the plus side, this knowledge means you can give your toddler an old iPhone without complaint – they won’t notice how slow it is since the latest iOS update.

1 Air travel never going ‘back to way it was’
2 Should I switch bank now with Ulster Bank at risk of closing?
3 Stripe wins more corporate customers, announces Salesforce deal
4 Irish company to test vaccines on volunteers deliberately infected with Covid-19
5 Eir takes on extra staff as ComReg chases it on complaints
Real news has value SUBSCRIBE