CarTrawler eyes further growth as it downplays talk of flotation 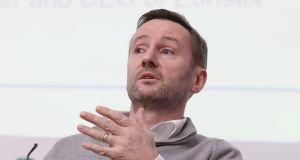 Software group CarTrawler is not actively considering a stock market flotation at present.

“Of course a flotation is possible but is it likely in the near term? Not at all,” says chief technology officer Bobby Healy, who concedes he too keeps hearing rumours of a looming public offering. “We’re doing just fine as we are. A flotation is usually done when there is a need to raise capital but we don’t need to do that. We’re a hugely profitable company and one that is still very much growing.”

Speaking to The Irish Times on the sidelines of an event held in Dublin earlier this month by Duff & Phelps’ technology M&A division, Pagemill Partners, Mr Healy says the business continues to thrive “in a market with enough headroom to give us many years of growth”.

CarTrawler is a great Irish success story with an estimated turnover of about €620 million in 2016, and with close to 600 employees. Founded by brothers Greg and Niall Turley in 2004, having grown it out of their family business, Argus Car Hire, a majority stake was sold to private equity group ECI Partners in 2011.

The business is now owned by BC Partners of London and Insight Venture Partners of New York.

“We’re already in 174 countries but there is still plenty of growth possible. Take China for example. It is currently one of our weakest markets, but with huge opportunities for us there,” Mr Healy added.

He also says the company is looking to broaden its relationship with end users by providing more services to them that extend beyond just car hire.

“We are now doing pretty much everything apart from renting out families to meet you at the airport on your arrival. And you know, we could be talked into that as well,” he joked.

In addition to rumours about a possible flotation, there were a number of media reports last year that BC Partners was considering selling its stake in a deal valued at close to €700 million.

That hasn’t happen to date and, according to Mr Healy, the relationship between CarTrawler and its partners continues to be “very harmonious”.

“We are a galloping horse that keeps winning trophies, so obviously we’re very liked,” said Mr Healy, who, prior to joining CarTrawler in 2006, founded Eland Technologies, which he later sold to airline technology giant Sita.

“It helped us bring in Patrick. I’m not sure we’d have been able to do that if we were just a bunch of gobshites from Dundrum,” he said.

Mr Healy claims that he is still as excited working for CarTrawler as when he started, largely because he still plays an active role in shaping the company’s technology and leads its 18-strong inhouse tech incubator

“I bought into the business with a view to getting out within two or three years, partly because I have a low attention span. That was my intention but I’m still here 12 years later and it is still as exciting as hell.

“It is always exciting when your keep scoring goals as CarTrawler has done but beyond that I’m still a techie who still loves to code and the products we’re building in-house right now have the potential to be as big by themselves as the business currently is,” said Mr Healy.

1 HSBC board rethinks overhaul and seeks even deeper cuts
2 ‘Over 1,000’ pubs have interest in Covid-19 insurance test case
3 Reopening economy does not cause coronavirus spike – researchers
4 Denis O’Brien forced to lift hood on Digicel in debt restructuring
5 How to . . . move (almost) everything to your new phone
Real news has value SUBSCRIBE