Enet chief steps down ahead of awarding of broadband contract 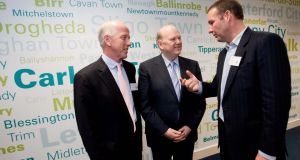 The chief executive of Enet, the sole remaining bidder in the Government’s broadband process, has stepped down just weeks after placing the telco in pole position to win the State contract.

The surprise departure of Conal Henry, who has spearheaded Enet’s bid for the National Broadband Plan (NPB) from the start, comes in the wake of Eir’s exit last month and adds another twist to the Government’s increasingly fragmented procurement process. Neither the company nor Mr Henry gave an explanation for his sudden exit.

Announcing his decision on Twitter on Monday night, Mr Henry said: “After 12 years working on the wonderful @enet_ireland project, the time has come for me to hand over the reins.”

The company later confirmed that Mr Henry would be replaced by Bartley McElroy, currently Enet’s director of sales and marketing.

It also said his departure would not impact Enet’s participation in the NBP procurement process.

The company, which operates the State’s Metropolitan Area Networks (Mans), a series of telecommunications networks built around 94 towns, was recently joined in its bid for the NBP by FTSE-listed energy firm SSE.

“Enet is now at an important point in its development. We have some fantastic opportunities in front of us and have put a new organisational structure in place to ensure we can successfully address those opportunities,” Enet chairman David C McCourt said on Tuesday.

Last year, 78 per cent of the company was acquired by the State-backed Irish Infrastructure Fund (IIF) in a transaction that valued it at between €150 million and €200 million.The remaining 22 per cent is held by US telecoms investor Granahan McCourt Capital.

The Government’s tender process was rocked last month by the exit of Eir, which, as Ireland’s largest telco, had been favourite to win the contract. Eir’s departure leaves the Enet-led consortium as the only bidder in the race.

Provided the Government and Enet can agree a price and an operations model, the telco is expected to be elevated to preferred bidder status in September with the project, which aims to connect 542,000 homes and businesses in rural Ireland to high-speed broadband, commencing in 2019.

Earlier this month, Mr Henry said the company was confident of delivering on time and within the cost expectations of stakeholders.