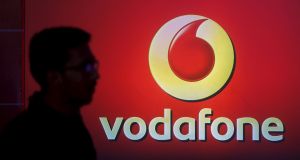 Vodafone Qatar losses have been building since the company started operations in 2009. Photograph: Reuters

Vodafone Europe agreed to sell its stake in a Qatar joint venture for €301 million, capping an almost decade-long string of losses amounting to more than $1 billion (€816 million).

Qatar Foundation, a non-profit run by the gas-rich country’s royal family and Vodafone’s partner in the country, agreed to buy the exiting company’s stake and will own 50 per cent of Vodafone Qatar when the transaction is completed. Vodafone Qatar losses have been building since the company started operations in 2009.

Vodafone will provide technical support for a period of at least five years, Ian Gray, the Qatari unit’s chief executive, said. Mr Gray, who will retire after the March 19th shareholder meeting, will be replaced as CEO by Sheikh Hamad bin Abdullah Al Thani – the company’s current chief operating officer.

Vodafone Qatar plans to restructure its balance sheet to eliminate the 4.3 billion riyals (€964 million) in accumulated losses, which it said was attributable to the “amortisation costs” of its licence to operate in Qatar. It reached an agreement with the government to extend its telecommunications licence by 40 years to 2068.