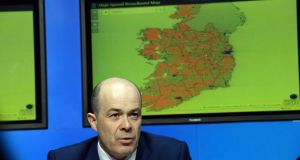 Minister for Communications Denis Naughten announcing details of the National Broadband Plan. The recent withdrawal of Eir from the Government’s procurement process, has raised questions over the competitiveness of the tender. File photograph: Cyril Byrne/The Irish Times

BT Ireland’s managing director has cast doubt on whether the National Broadband Plan can be delivered with just one company left in the tender process, and if the project will represent value for money for the taxpayer.

Speaking as the telco announced a sharp fall in operating profits and revenues last year due largely to accounting changes, Shay Walsh questioned if the consortium led by Enet could deliver the plan.

The recent withdrawal of Eir from the Government’s procurement process, leaving just Enet as the sole bidder in the race, has raised questions over the competitiveness of the tender.

Mr Walsh said that his company’s experience in being involved in a similar process in the UK was that economically the most suitable provider was the one that was “best equipped and will cost least in terms of subvention”.

“I’m not sure Enet is that. The natural company for that here is Eir who are effectively riding two horses in this because they will get a very high percentage of whatever gets spent [from the plan] on the network into their pockets anyway,” he said.

To get at the homes earmarked for the plan, Enet would have to traverse Eir’s network, which “had a deficit of investment”, he said.

“Am I uncomfortable about that? A little bit. Is the taxpayer best served overall by giving the plan to Enet in terms of cost of subvention, I’m not sure. What I am sure of is that the country needs the plan to work.

“We’re not going to continue to be successful as a country unless we have great broadband. It is needed to ensure a balanced economy and to bring about a digital society,” he added.

Mr Walsh was speaking as BT Ireland reported a 65 per cent fall in operating profits to €18.1 million in the 12 months to the end of March 2017. This compares to €53.9 million a year earlier and follows a rise in charges for network services from other company divisions.

Turnover was also sharply down last year on the back of accounting changes, the ending of a major one-off contract, and a decline in wholesale revenues.

Revenues were down 10 per cent to €457.6 million from €507.8 million over the same period due in part to a €16.8million recharge to other BT entities for voice and network services, that in prior years would have been recorded as a revenue gain.

BT, the second largest fixed-line communications and IT services company in the Republic, said the accounting recharge, which has been driven by its parent, was designed to eliminate internal divisions from generating profits from intercompany trading.

Mr Walsh said the group’s parent had since reversed the decision, meaning that the recharge will again count as a revenue gain in the next set of company accounts.

He also noted the ending of a significant one-off contract deal with a multinational customer for work related to a data centre overseas, and the impact of mobile termination rate reductions, for the steep drop in revenues.

The decline comes after a particularly buoyant period for the telecoms company in the prior year when pretax profits and turnover jumped by 28 per cent and 14 per cent respectively.

“Despite all the various headwinds, if you look at the underlying revenues the year-on-year figure was actually flat. This year we’ll be at about 5 per cent bottom line growth,” said Mr Walsh.

BT Communications Ireland Limited provides global connectivity and networked IT services to both the public and private sector. It also offers wholesale network services to more than 50 communications companies, including Sky, for whom it is rolling-out of its fibre broadband service locally.

“We are consolidating wholesale and adding new areas of business, which will take time to bed in but we’re very positive about it. Our business side is also growing well as customers adopt new technologies,” he added.

The company was last week awarded the contract to operate the Emergency Call Answering Service on behalf of the Department of Communications for a period of seven years, one of the only non-incumbents to win such a deal in Europe.

The subsidiary employed 602 people at the end of the financial year with staff costs, including wages and salaries, totalling €49 million.

1 How can I view my dead brother’s will if I’m not the executor?
2 Applications for 961 new homes in Dublin and Meath rejected
3 Michel Barnier rejects UK’s call for Canada-style trade deal
4 Aqua Dome in Tralee could close over insurance claims, directors warn
5 Investors pile into property as turnover in build-to-rent sector reaches €2.54bn
Real news has value SUBSCRIBE