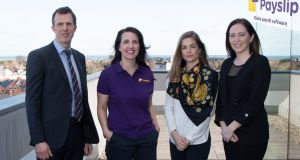 The founding round was led by AIB and early-stage venture capital firm Frontline Ventures. Other backers including Tribal, Hban Bloom Equity and Enterprise Ireland.

Headquartered in Westport, Payslip provides software that simplifies and reduces the costs of managing a global payroll for businesses with employees in multiple jurisdictions. Its cloud-based software-as-a-service (SaaS) platform includes functions that enable clients to meet General Data Protection Regulations, which come into effect in May.

Payslip said it intended to use the funds for expansion purposes, which included taking on 12 new staff this year.

Ms McGuirk said the company had already begun hiring for a number of roles, including chief technology officer, international payroll, operations and sales roles. Other planned hires include software engineers and integration specialists.

Prior to establishing Payslip, which previously received funding from Enterprise Ireland through its Fintech Competitiveness Start Fund, Ms McGuirk founded Sprintax, a SaaS-based platform for the international student tax market. She also spent more than a decade working at Taxback, the group established by entrepreneur Terry Clune that now employs over 1,000 staff in 32 countries.

1 Should my mam wait for house prices to drop before buying?
2 Pilita Clark: Why we’re about to learn if we are really in the A-team
3 Irish whiskey sales near milestone of 12m cases a year
4 Citigroup warns that markets are out of step with reality
5 US ‘hard seltzer’ drink White Claw launches in Ireland
Real news has value SUBSCRIBE