Social media accused of abusing power ahead of US election

US senators grill the CEOs of Twitter, Facebook and Google during a hearing about the reform of a federal law protecting internet companies from liability for content posted by users. Video: Reuters 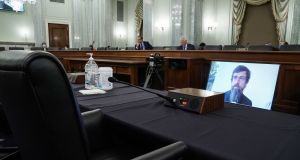 The leaders of big US technology companies came to testify about legislation that shaped the modern internet. They ended up being accused by senators of abusing their power over political speech six days before election day.

“Who the hell elected you and put you in charge of what the media are allowed to report?” Senator Ted Cruz, a Republican from Texas, asked Twitter chief executive Jack Dorsey.

While the fiercest attacks came from Republicans, Democrats on the Senate commerce committee also questioned Mr Dorsey, Google’s Sundar Pichai and Facebook’s Mark Zuckerberg to determine whether Section 230 of the Communications Decency Act needs to be updated.

The law says companies aren’t publishers of their users’ content, and therefore grants online platforms some legal immunity from the content users post. It has come under intense scrutiny after Facebook and Twitter recently limited the online reach of a New York Post story, prompting claims of bias and censorship. Twitter backtracked, but the episode fueled tense exchanges during Wednesday’s hearing.

“The time has come for that free pass to end,” said Senator Roger Wicker, a Mississippi Republican who chairs the panel, referring to Section 230.

The questions devolved into partisan bickering. Republicans criticised tech companies’ moderation of US President Donald Trump’s posts, while Democrats said they feared the hearing was a Republican attempt to influence the CEOs days before the election.

“They seem to want to bully and browbeat the platforms here to try and tilt them in President Trump’s favor,” Senator Richard Blumenthal, a Democrat from Connecticut, said. “The timing seems inexplicable except to try and game the refs.”

Tech executives began their testimony by explaining the importance of the rule for building their businesses. Mr Dorsey called Section 230 “the internet’s most important law for free speech and safety”, and argued that repealing it would lead to more policing of content, not less.

The CEO said real-world harm is one of the factors Twitter considers when deciding whether to put a warning on a specific tweet.

Section 230 lets companies wait to moderate users’ speech until after it is posted, helping their platforms to grow unencumbered by constant legal challenges.

Google’s YouTube video-sharing site doesn’t have to pre-screen the millions of videos uploaded daily, and Facebook doesn’t have to read every comment; they can let user posts flow freely and clean them up later if something bad happens.

“Our ability to provide access to a wide range of information is only possible because of existing legal frameworks,” Mr Pichai said.

Over nearly four hours, members of the committee asked the three social media executives more than 120 questions about social media speech and the harm caused by their platforms, often framing their attacks through the lens of next week’s election.

Of the 81 questions asked by Republicans, 69 were about censorship and the political ideologies of the tech employees responsible for moderating content, according to a tally by The New York Times. Democrats asked 48 questions, mostly about regulating the spread of misinformation related to the election and the coronavirus pandemic.

Despite bickering within the hearing, Republicans and Democrats are expected to continue the drumbeat for changes to Section 230 in the next Congress. Before then, Zuckerberg and

Dorsey are likely to appear before Congress again. Both have agreed to testify at a Senate Judiciary Committee hearing next month on how their companies handled election content. – Bloomberg/New York Times