Failure to invest in 5G could result in €12.6bn economic loss - study

GDP loss could rise to €20.9bn by 2035, according to calculations made by Amárach 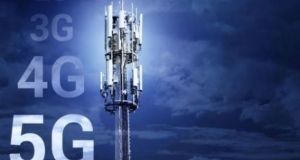 5G brings faster speeds of up to 1Gbit per second, as well as increased security, reliability and lower lag time on data

Failure to invest in 5G technology could result in a €12.6 billion economic loss over the next decade, according to a new study.

The study, which has been conducted by Amárach Research on behalf of mobile equipment maker Huawei Ireland and the Small Firms Association, suggest any delay in rolling out the technology will not only lead to a reduction in economic growth but also a slowdown in technology innovation.

As part of the study, 200 SMEs were surveyed on their likely use of 5G technology with 57 per cent of respondents saying they are willing to invest in it to improve remote working for staff.

The report suggests Irish companies are aware of the technology as being more than just faster internet speeds with close to half suggesting that the operational cost savings that could be obtained through 5G are a key attraction.

Two-thirds of the companies surveyed suggested effective 5G investment will be important to the State’s economic recovery.

Vodafone, Eir and Three have all now announced 5G services locally, although these are still very much in their infancy with nationwide availability not expected for some time. While Eir is using equipment from Huawei for its 5G network, other operators have steered away from the company, which the US government has claimed is a national security risk.

5G is the next generation of mobile connectivity, succeeding the current 4G and older 3G systems. It brings faster speeds of up to 1Gbit per second, as well as increased security, reliability and lower lag time on data.

“From the viewpoint of the recovery challenge that lies ahead, it is clearer than ever that investing in a world class 5G network will play a vital part in Ireland’s future than anticipated even 12 months ago,” said Gerard O’Neill, Amárach Research.

“ 5G’s importance and relevance to the growth prospects of Ireland’s indigenous SME sector cannot be underestimated. Failure to invest in and adopt 5G could result in billions lost in GDP over the course of the next decade,” he added.

3 Flutter to buy out US business in €3.4bn deal