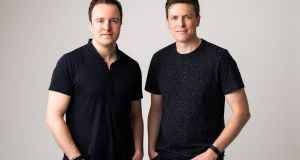 VentureWave Capital is now halfway to reaching the €100 million target for its new fund, which intends to invest in promising technology companies in Ireland. Hollywood actor Liam Neeson is among a number of new high-profile investors for the Ireland Impact fund, the Dublin-based private equity firm said.

VentureWave Capital, which is expected to reveal its first investment shortly, is aiming to take strategic stakes in about 15 companies that are either originally from Ireland or which are prepared to relocate from elsewhere and grow their business here.

Investment levels will range from €1 million to €25 million with the fund targeting cloud-based “technology for good” companies with revenues of less than €10 million that are working in sectors including education, healthcare, food and agriculture, energy and the environment.

The private equity group announced the first close of its fund in June with some €20 million secured.

Alan Foy and his business partner Brian Martin, who previously led Irish tech company Blueface, which was sold to Comcast earlier this year, last week confirmed they are transitioning to become managing partners of VentureWave along with Kieran McLoughlin, who stepped down as the New York-based chief executive of The Ireland Funds in 2018.

Mr Foy said the VC has not struggled to find investors to date despite Covid. He added it has received a lot of interest from companies that are looking for funding.

“We’ve been really impressed with the calibre of companies contacting us and I have to say the whole process has been really enjoyable so far,” he said.

“For the companies we’re likely to back, we’ll probably be the first proper Series A for them. We will also do some Series B as a follow-on but probably no later than that,” Mr Foy added.

Mr Martin said that as well as providing financing, the VC was very much focused on assisting companies to grow by “showing them how we learned all the things that can go wrong and how to avoid doing the same”.

The fund is seeking investments that will generate a return for society as well as investors. It has also said it intends to back profit-driven companies which also advance the UN’s Sustainable Development Goals.

The group is also the first Irish signatory of the World Bank’s International Finance Corporation’s operating principles for impact measurements, a measure that is seen as setting the standard by which the social benefit of impact investments will be gauged.

“They [the investors] are joining us on the journey as they recognise that the pursuit of profit with purpose can have lasting effects not just on investment performance but also for society at large,” said Mr Foy.